Explore the value of Character 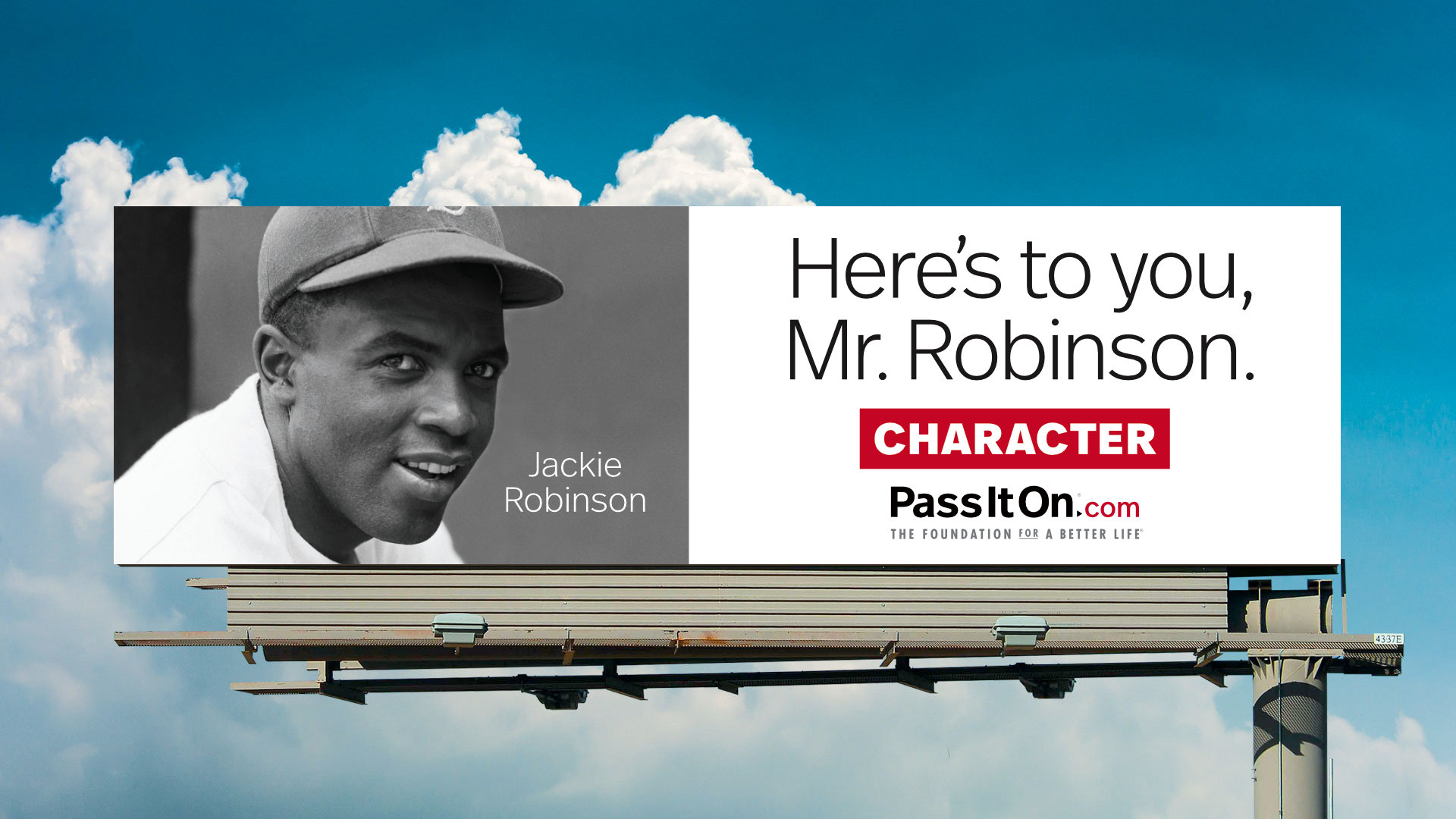 Our national billboard campaign features positive role models and uplifting values including character. Since we started in 2000, we've made over 70 billboards. Which one is your favorite?

Email
Your Comments
Cheyenne from Ilion NY JUNE 13, 2017
I would always want to be myself

Dennis Dinzeo from Las Vegas, NV APRIL 3, 2014
We all face unfair treatment, but no one can take away the personal choice to become part of the problem or part of the solution.

Letta from Akron, OH FEBRUARY 8, 2013
Let no one live rent free in your head.

Letta from Akron, Ohio FEBRUARY 8, 2013
There's good in the worst of us and bad in the best of us, till it makes no sense to talk about the rest of us.

King from Sampaquita DECEMBER 9, 2012
Be always kind to others. Set an example through yourself.

Pratiba Velummailum from Malaysia DECEMBER 6, 2012
We are judged by our character. People may like or hate us for whom we are. Start by being good to yourself first, in order to set a good example to others.

Ramesh from India AUGUST 3, 2012
Character is but a reflection of one's personality! It's the sum total of what he actually is.

zaina from rome,ga JUNE 7, 2012
WELL I THINK THAT BEING YOU IS A CHARACTER.BECAUSE YOU ARE STRONG IN YOUR OWN WAY,YOU ARE CREATIVE IN YOUR OWN WAY.FAITHFUL,AMBITIOUS,GRACEFUL,HONEST,DEDICATED,EXELLENT,AND BEAUTIFUL IN YOUR OWN WAY.AND THAT IS THE GREATEST VALUE OF ALL! :)

sid from hyderabad MAY 18, 2012
Neither money pays, nor name, nor fame. It is the character that can cleave through walls of difficulty.

Karen Su from Diamond Bar MARCH 19, 2012
This really helps! My teacher even assigns it for our homework so we can learn it! Thank you!!!

Anindya from Roy FEBRUARY 13, 2012
Character is to become aware of the SELF; live every moment with full conscious. Our biggest enemy is our lack of self control, because of which we become victim of decisions that we regret later; to be able to get control of our senses, we need to lead a life of moderation and control our desires. The only way to allow our true SELF to emerge is by practicing restrain. Do not allow your senses to delude you overshadow your real character.

Teresa from Dalton, GA JANUARY 4, 2012
Character is demonstrated by our actions. What do your actions say about your character?

Brissa from dalles NOVEMBER 9, 2011
Is being a good frind and showing your chariter

Rich from Mississippi SEPTEMBER 6, 2011
Be more concerned with your character than your reputation. Your rep is what people think you are, your character is what you are when no one is watching.

Patrick G. from La Quinta, CA FEBRUARY 27, 2011
Tolerance: We need to communicate respectfully with those we strongly disagree with.

TiffanyAnn from Coldwater, KS FEBRUARY 9, 2011
Character is doing what's right even when no one's looking. So that way if someone asks who messed this up you can say with a clear conscience that you didn't do it.

adu joseph forson from lagos JANUARY 25, 2011
they are values everyone has and also imbue and cultivate in order to become the best in life and be the best in leadership skills.

T J from North Carolina JANUARY 13, 2011
Character is what he or she does when nobody else is around.

Josh from Illinois DECEMBER 29, 2010
Character begins in the home and at a young age. My daughter uses Characters of Character at her school and it worked wonders. I got her the book Tune Into Good Character for Christmas from their website. Everyone should look to this program for their kids if they are having behavior or character issues.

Sam N from Atlanta, GA OCTOBER 25, 2010
Character is doing the right thing when nobody is looking and when you know nobody will ever know.

Natalia T from Chicago, illinois OCTOBER 8, 2010
Do things that show character because character is super important to life.

Clay H. from Haverford, PA JULY 30, 2010
Charcater is always doing what you said you would do. People of character earn the trust of others and thus are more successful in life.

Doreen R from Hemet, Ca. MAY 3, 2010
I love your TV spot I see on Fox News about the little boy playing the piano at a concert. I hope you keep using it. I could watch it every hour of every day.

Towana S. from Maryland FEBRUARY 13, 2010
Character and honesty are something you either have or you don't. You can't pretend to have these values.