Explore the value of Courage 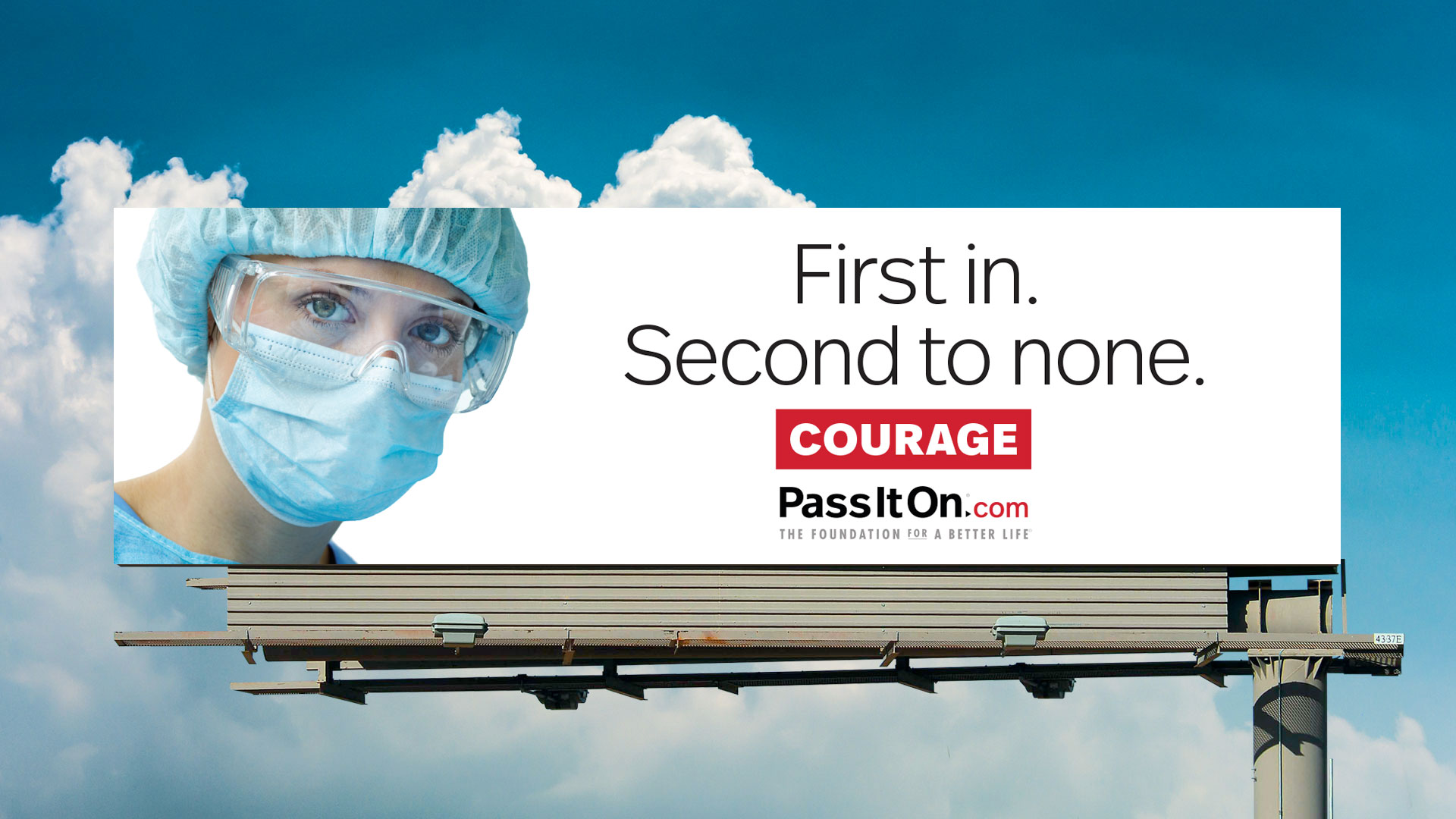 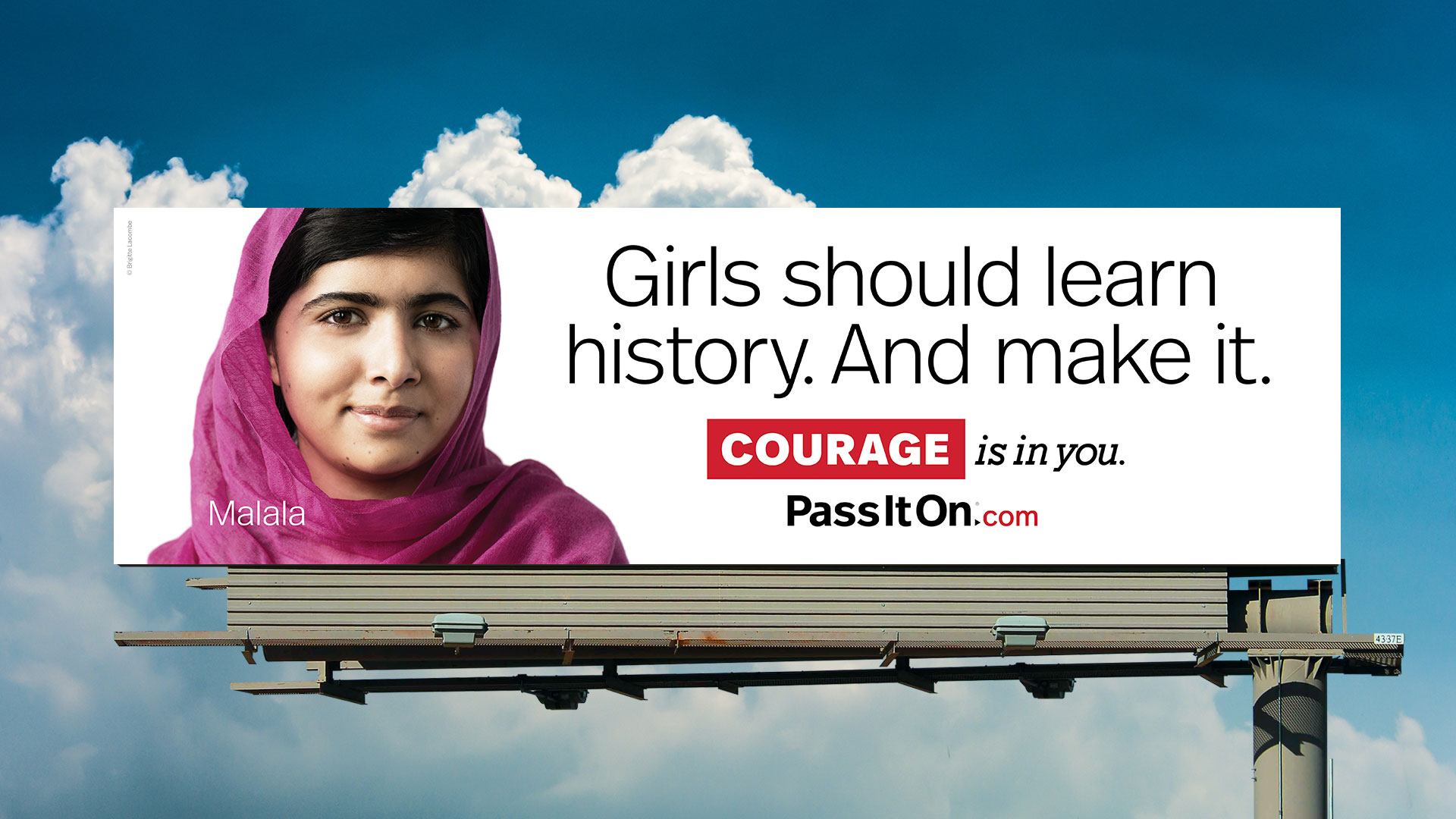 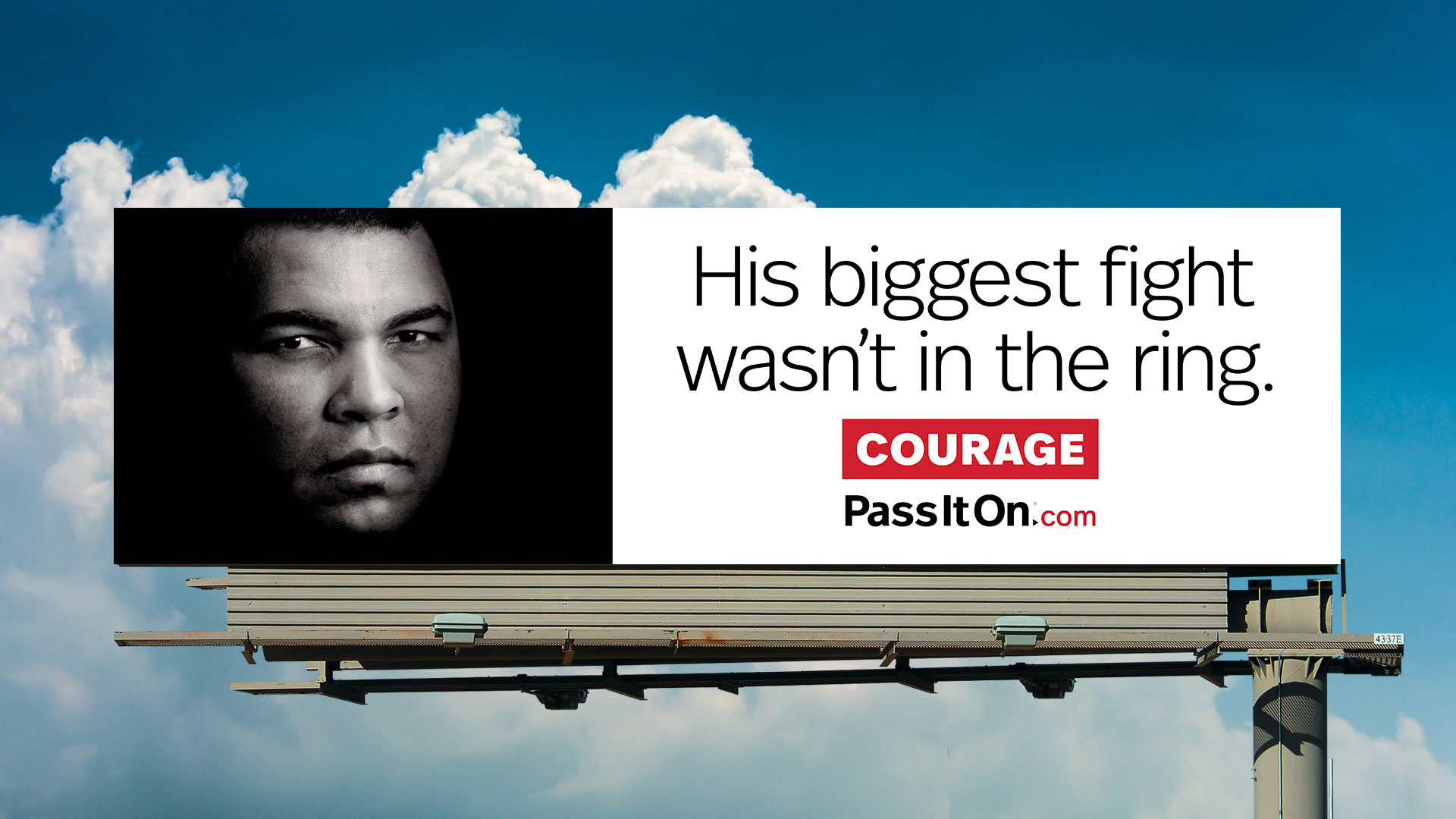 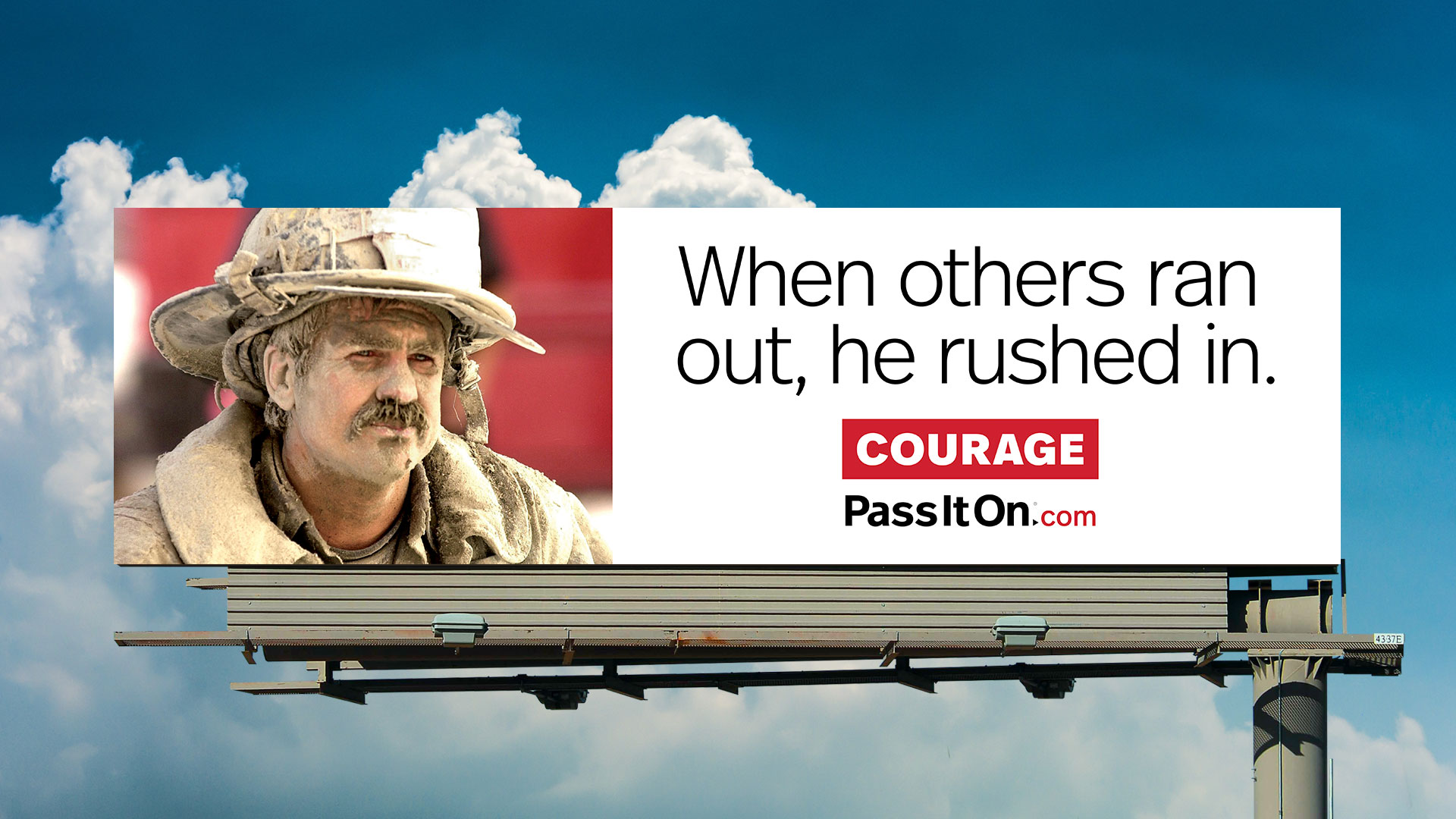 Our national billboard campaign features positive role models and uplifting values including courage. Since we started in 2000, we've made over 70 billboards. Which one is your favorite?

Email
Your Comments
breanna AUGUST 25, 2015
courage takes alot of effort the effort you can make

J from Seattle JUNE 18, 2014
Courage is doing the right thing when everyone else is afraid to do so.

Cheri from Kansas City MAY 23, 2014
Courage is fear that has said its prayers.

Lila from Curtis MI usa DECEMBER 10, 2013
courage is being able to stand up for what you believe in. to not let others bring you down because you are different, because you are a great person who can do great things no matter what others think. Believe in yourself

Ruby from california DECEMBER 10, 2013
Courage is not the absence of fear, but the strength to overcome it

Manibha Thakur from India JULY 22, 2013
Courage is not all about how we face our problems but it is also how we tackle our problem

Anderson from Colatina-ES, Brasil NOVEMBER 5, 2012
Courage is the foundation of most of the stories I read in values.com because amazing people show up in unlikely circumstances, in situations we need to be courageous decision not to fear anything.

Rodrigo from Clawson, MI MAY 16, 2012
Courage is using your body to shield others.

Diane from USA MAY 8, 2012
Words I live by from Amelia Earhart - Courage is the price that life exacts for granting peace. The soul that knows it not, knows no relief from little things, knows not the livid loneliness of fear, nor mountain heights where bitter joy can hear the sound of wings. When did you last feel joy?

brytan lord from callander, ON APRIL 18, 2012
Courage is my character.

JuJuman from Kansas APRIL 7, 2012
Courage does not always roar. It is the still small voice at the end of the day that murmurs,I will try again tomorrow.

Emmanuel from Africa, uganda MARCH 30, 2012
courage is overcoming your fears and replace them with right attitude to overcome the challenging situations in life.

austin from toronto ontario FEBRUARY 16, 2012
courage is staring fear in the face and saying bring it on!

Jennifer K from Washington State JANUARY 19, 2012
Responding to a need or situation that is greater than myself

Erin from New York DECEMBER 20, 2011
Courage is not the absence of fear, but the ability to overcome it.

Jonathan E. Martinez Reyes from Pheonix, Arizona  DECEMBER 1, 2011
Being in the U.S. Army it takes courage to go out and be willing to take a life in order to save your own life and others lives but the true courage is in walking up to the enimies and making peace with them.

Mary from Santa Monica, CA NOVEMBER 16, 2011
Courage is choosing to get out of bed every morning when you don't feel like facing the day.

Ty from CA NOVEMBER 8, 2011
Courage is taking a deep breath and diving in.

mollie from tennessee NOVEMBER 8, 2011
Courage is being brave and standing up for yourself and who you love

Annmarie from Toronto , Canada OCTOBER 26, 2011
Courage is getting back up after you've been knocked down. It is the will power to continue the fight, wipe your hands and say I can do this!

Annie from Hampton Bays, NY OCTOBER 14, 2011
Courage is getting up out of bed everyday, going to work to provide for your family, doing whatever you can to find some happiness for yourself and the ones you love, trying to get some sleep at night and then doing that all over again tomorrow.

ORJI AUGUSTINE NKEMJIKA from NIGERIA OCTOBER 9, 2011
Courage is having the will power to do incredible things despite the terms and condition, provided it is the right thing to do from the heart.

jonathan from Spring, Texas OCTOBER 2, 2011
Courage is reaching deep down inside yourself and facing your fears, so that when your fears rear their face, you know how to engage them. When I was involved in an accident in an ambulance in 2006, I thought I would never set foot on an ambulance again, Now, in 2011, i work for a service based in the Texas Med. Center, I am a firefighter and First responder for my Fire dept. Courage is gained as we battle. Courage is not something you are just given...you face the things you fear and you gain courage...so that you can beat down your enemy every time after that...

Amariah from Barrie, Ontario, SEPTEMBER 11, 2011
I think Courage is standing up for what you believe is right. Being your own person and not caring what others may think of you.

Logan from Kent, Washington SEPTEMBER 3, 2011
Courage is standing to challenge the same force that many would turn tail and run from. Courage is having the willingness to risk something of yours for somthing of someone else.

Sam B from USA JULY 27, 2011
Courage is rushing in where others run out. It's when one can stand up where others hide behind them. Courage is being a voice for someone who has none. Courage is not fighting fire with fire, but being able to run up there and stamp out the flames. Courage is shutting up whatever your gut says and doing what your heart is screaming to do.

Monica from Asia MARCH 1, 2011
Courage is when you know you've got everything to lose, but you go ahead and do what your heart tells you anyway, because you know it's the right thing to do.

Erika S. from CA FEBRUARY 24, 2011
Courage is following your heart!

Brandon Ellis from Kenai, Alaska FEBRUARY 19, 2011
Courage is when your heart tells you to do something but your mind and knowledge of something keeps you from doing it. Anyway sometimes we have to overcome our fears, and build the courage it takes to do what we fear regardless of what the outcome might be. Having courage can do remarkable things and take you places you’ve never imagined.

Mark J. from Texas JANUARY 8, 2011
Courage is doing the right thing for the right reason, even when everyone else thinks you're wrong.

Sam N from Atlanta OCTOBER 25, 2010
Courage is making a commitment when a decision is necessary even without complete knowledge of the probable outcome.

Kayla H from USA OCTOBER 10, 2010
Courage is when everything in your body tells you not to do it, but your heart says otherwise.