Explore the value of Encouragement 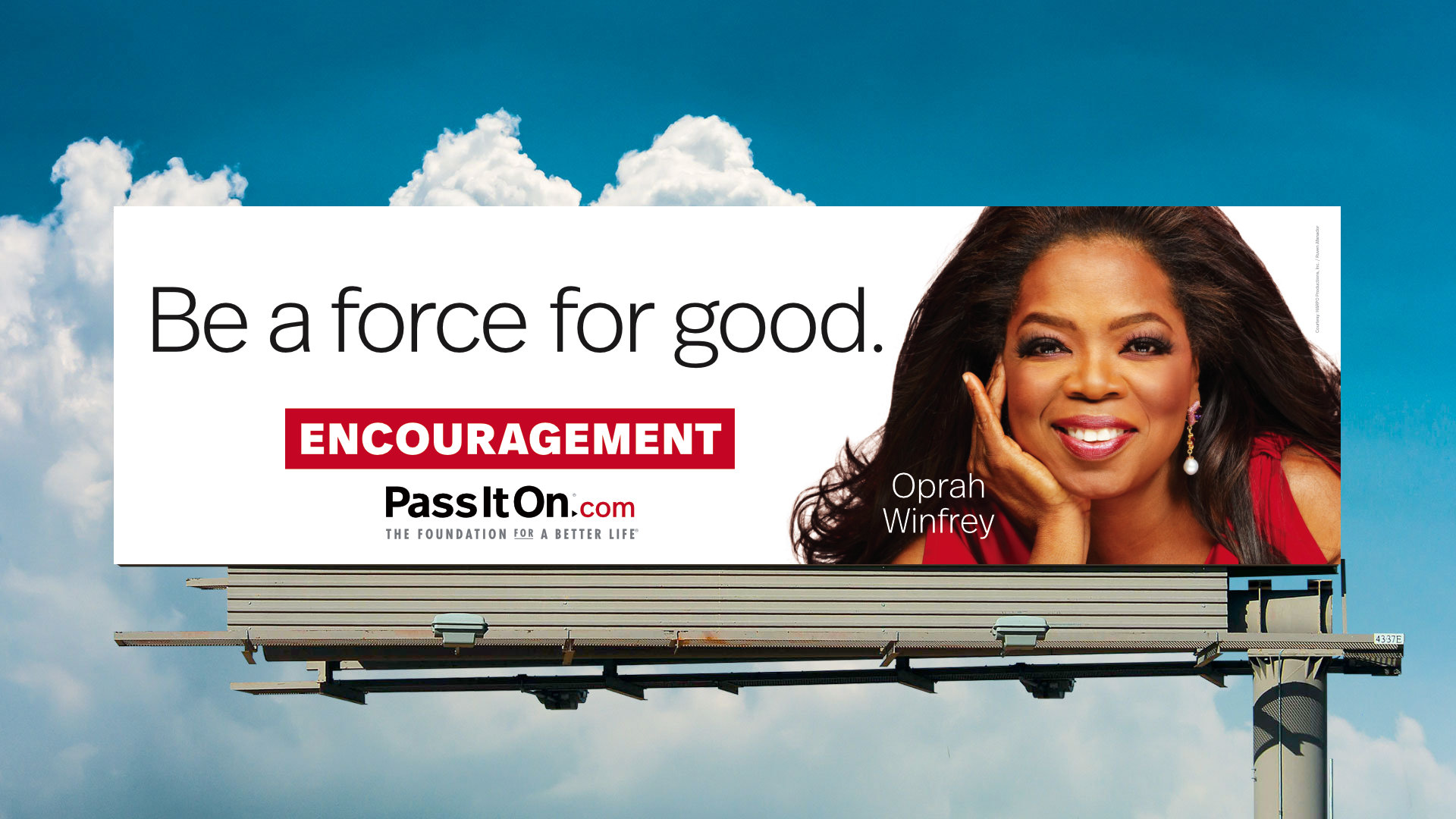 Our national billboard campaign features positive role models and uplifting values including encouragement. Since we started in 2000, we've made over 70 billboards. Which one is your favorite?

Email
Your Comments
Christina Denny from Puyallup, Wa FEBRUARY 6, 2014
It is ok to live life one second at a time, other than one day at a time

Russell Champlin from San Jose, CA FEBRUARY 27, 2012
If you leave behind a single vestige of your passage - let it be encouragement. No single relic costs so little and has such worth. An act, a gesture, a helping hand. A positive word placed correctly can produce results unknown or realized in your time. The germination of a thought or an action in others can be produced years later on this invisible chain. Be secure with your words for they can both help and harm with exponential power. Your interactions can be devastating in their consequences,unrelated to your motives. Both self esteem and potential can fall victim to a misplaced word or action. Unknown accomplishments may go unrealized by self confidence misplaced. Be wise, that what is contained in others remains unknown and private,needing to be respected or left untouched. Your dealings should be free of self interest or intention. For like any contact the sensation will be unique for both. Rewards may be exclusive, never shared or directly tied. Let the best direction for your actions be as the Hippocratic oath commands “First do no Harm”

Jennifer K from Washington State JANUARY 19, 2012
A life lived with courage includes a lifetime of encouraging others

Patrice from California JANUARY 7, 2012
Your commercial on Encouragement is fantastic...if only ALL commercials could be like this...Thank you!!!!

Anderson from Colatina - ES Brasil DECEMBER 1, 2011
Temos que ser encorajados e encorajar as pessoas, acreditar no potencial do ser humano. We have to be encouraged and encourage people to believe in the potential of being human.

Joe from NJ NOVEMBER 14, 2011
Just saw your 'Twinkle, Twinkle' advert. Beginning had me cringing, as expected, but by the end I had a lump in my throat. Beautiful, much needed campaign. Thank you.

Dan P. from Cocoa,Fl SEPTEMBER 6, 2011
GREAT DAY, Thank you for the little boy at the piano. The word of "ENCOURAGEMENT" is 1 of the foundations our house will be built on with LOVE and INTEGRITY

William A. from Minnesota JULY 19, 2011
I appreciate your spot that reminds us to treat each other encouragingly. Alfred Adler said children need encouragement like plants need water. I think children are not alone in this.

Christa from Pennsylvania MAY 26, 2011
Never underestimate the impact that your belief and faith in someone can have on their life. That kind of goodness is so powerful that it, alone, can turn the tide of the world. Thank you so much for this beautiful organization and for inspiring me.

Maria P from Miami, Florida MAY 30, 2010
I would like you to show a video where a little school child is crying because of a little bully and a kind teacher stands up for him. Thanks for all you do for others. You are #1

Jana A from California MARCH 21, 2010
There is a very valuble class that i believe our president should implement in schools several times throughout the learning experience called Love and Logic. It teaches people how to handle situations and learn from them without the use of pain and put downs. We should all come together to put this in action in all schools today. These tools of encouragement are probably the most effective way to a better life.

Bill H. from Colorado MARCH 3, 2010
Encouragement (little boy at the piano)is the best ever! Never ceases to bring tears to my eyes, thank you...