Explore the value of Believe In Yourself 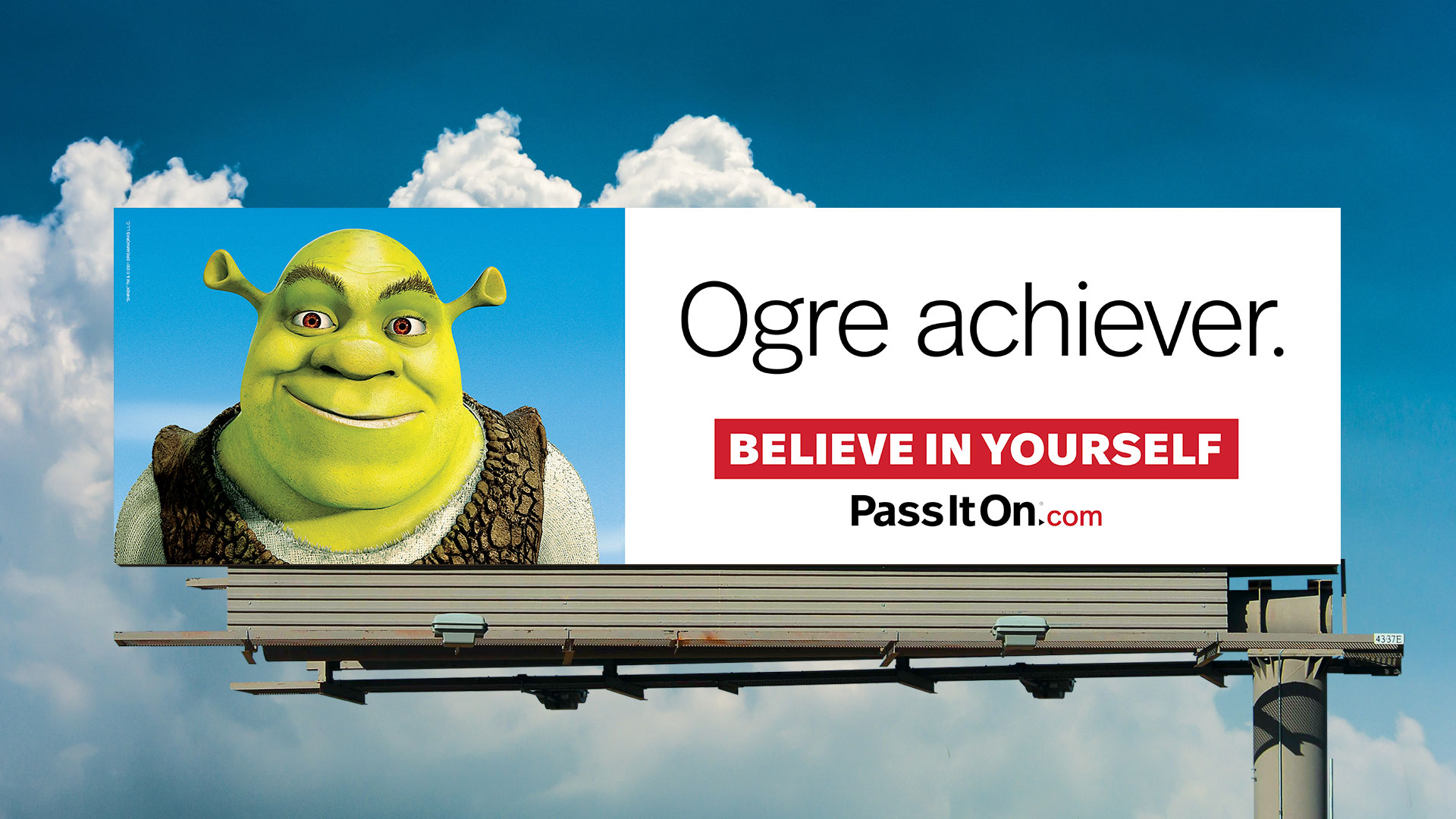 Our national billboard campaign features positive role models and uplifting values including believe in yourself. Since we started in 2000, we've made over 70 billboards. Which one is your favorite?

Watch our believe in yourself television commercial

BELIEVE IN YOURSELF QUOTATIONS

Email
Your Comments
Pam from U.K SEPTEMBER 1, 2015
Never mind yourself think of others .It will make you happy and it will make others happy . What could be better

breanna AUGUST 25, 2015
believe in yourself and expect much to come

Alejandro Leon from LJH APRIL 17, 2014
Believe in yourself

romylyn bolos from philippines FEBRUARY 4, 2014
I'm a values education teacher and these videos really inspires me to PASS IT ON to my students. Thank you so much! This will definitely help my students More power and God bless

jeffery from chillicothe FEBRUARY 3, 2014
my name is jeff i been helping others follow their dreams an get them to believe in them self i show them about following what u love to do an they listen to every thing i said they are following their dreams

Delaney from Arlington, Virginia JANUARY 2, 2014
Thanks, VALUES! I saw your Kermit add in the airport in Denver, Colorado! It inspired be to Live my Dreams!

Courtney Griffith from East Fultonham, Ohio DECEMBER 19, 2013
Hi, my names Courtney. Everyday I encourage people to be the best they can be, I tutor everyday. When no one else believes in them I do! I believe they can do anything! In the end they all say that I am the most help they've had... that I'm the only one who believed in them (:

Xavier from Anderson Indiana DECEMBER 14, 2013
Do what is necessary too better not only you but your family as we'll and no matter the task no matter how hard or rough it may seem accomplish greatness I believe you can do extraordinary things in your life as I believe the same for I. We are all great in our own ways it is how you make it possible too do these things that make you truly great.... I wrote this my self. By Xavier Edwards

Lila from Curtis MI usa DECEMBER 10, 2013
you should always believe in yourself because you can always do great things no matter what others say. Remeber weird is good because if it isnt no ones good.

Gerginov from bulgaria NOVEMBER 15, 2013
you should believe in yourself just because someone said something or did something dose not mean

Lionel from Daphne, Al OCTOBER 8, 2013
The Perfect Day Is Built On The Attitude We Display From The Moment We Rise...Or We Fall!

katie from simmons SEPTEMBER 14, 2013
One of my favirite qoutes is you can do anything your mind set you to do. You follow your dreams becaue you can do it if you set ur mind to do it

youngarn from nigeria JULY 8, 2013
You can either be a plus or minus to ur generation, to be a plus, u must first see & appreciate the good that is in u before u can bring it out to impact others(ur abilities and gifts). Believing in urself is a must if u want ur generation to know that u came into this world.

Susan EdwaRds from westport ky JULY 3, 2013
A favorite quote of mine that inspired me in psychiatric nursing"The farther back we look the farther forward we can see" Albert Einstein

noizepreacher from hollywood JUNE 23, 2013
imagine a world, where there is no room and need for overestimated heroes.

Marcia Joseph from Barbados JUNE 14, 2013
Believing in you self is key.if you can't believe in yourself ,who will?

Arline from India JUNE 13, 2013
Yes we all know that this is all very very true and can be achieved by faith and persistence

namrata from india JUNE 6, 2013
i learnt that, we must believe in ourself and everything will go right.

Joyce from Johnnesburg MAY 14, 2013
In whatever you get,get understanding just as there is a forest in every seed,it is certain and very clear that there is a new world within your world so just believe in yourself

Thomas from London APRIL 29, 2013
Don't let anyone tell you that you can't do it because you can.

Sonam Tobgye from Bhutan APRIL 25, 2013
I was just typing the words that came into my head and found the “site“...it really helped me to boost my self confidence...

maddi bonham from great bend ks. JANUARY 10, 2013
Keep your head up no matter what you are. You no one else.

lexus from duluth,mn DECEMBER 29, 2012
I love reading everything on this site it gives me hope that one day I will believe in myself and be as strong as some of you people.

Lorna from Philippines NOVEMBER 10, 2012
Believing in yourself is a sign of self-respect.

ruben rodriguez from ruby NOVEMBER 3, 2012
You have 2 choices in life plain and simple, either you believe in yourself or you don't. That's up to you and what you do about it god bless.

Omodu Jack-West W. from Nigeria OCTOBER 17, 2012
You have something special about you that is different from others.. So believe in yourself.

Djeny Pires from Brockton, Ma OCTOBER 16, 2012
Just trust yourself, then you will know how to live...

Marlis from United States JULY 17, 2012
I recently was in the hospital for yet ANOTHER emergency surgery. My 18th surgery in 10 years, most of them not planned. It is what it is. I don't know about elsewhere in other hospitals but the ones I've been in have marker boards on the wall for nurses to right their name, the date, goals for the patient etc. I like to take over the goals section. I find a quote to post to inspire myself and those that are helping me. If nothing else, it makes someone smile. I have one vice in this world though I'm not sure if a decaf coffee from Starbucks without any syrups, milk, creamers or other flavors counts as a vice, hehehehehe. After 6 days in, I was getting antsy, so I marched over to the board and wrote, "Starbucks is out there!" It reminded me that even a simple silly goal of a decaf coffee is better than no goal at all, especially when you start to feel defeated, depressed and the "is this ever going to end?!" feeling. It got me to walking more. But what truly astonished me was how much it made all the people coming into my room be it doctors, nurses, lab personnel and visitors - laugh. Just absolutely crack up laughing. I heard many of the medical folks say they needed the laugh due to a tough day. So when you think you are only inspiring yourself, giving yourself a boost, the good vibes are passed along to the people who need it most and that has a beautiful ripple effect!

sally from new jersey MAY 13, 2012
I want sooo much to be able to believe in myself.. I read all these words out there that are so encouraging. I want that feeling.

Peppy from Swaziland APRIL 17, 2012
Believing in yourself means having faith in your capabilities and not letting anything stand in your way.

Vera from China MARCH 30, 2012
You can because you think you can,don't limit yourself.

Alex from California MARCH 16, 2012
life isn't about waiting for the storm to pass, it's about learning to dance in the rain

Brandon Johns from Springdale, Arkansas MARCH 5, 2012
I think your organization is wonderful. A lot of people I know haven't even heard of this organization though. You should really advertise more. We really need to put more positive values back into our society.

Bill from LightHouse Point Fl. MARCH 4, 2012
To believe in ones self is the utmost in self respect!

believerforlife from florida FEBRUARY 14, 2012
WALK IF YOU CAN, RUN IF YOU HAVE TO, CRAWL IF YOU MUST. just never give up. you only have one life live it. believe and just hope for more hope :)

ALLEN from EL PASO FEBRUARY 5, 2012
BELIEVING IN YOURSELF IS TO STRIVE TO DO WHAT YOIR HEART AND THOUGHTS DESIRE. HEY WE ONLY LIVE ONCE IT IS WORTH RISKING.

Pranaav from Kiev FEBRUARY 3, 2012
You need to belive in yourself when you need to do something hard.

craig meade from florida DECEMBER 27, 2011
your foundation is a very good thing this country could definitely use some better values-especially now have you thought about trying to get a course in schools-or even colleges? how about a book or booklet explaining the good and bad concerning certain values honesty and responsibility should be on the top keep it up and I hope awareness of good values spread

Jeri from Grover Beach, California DECEMBER 27, 2011
Words are powerful... we should never use them against ourself or to hurt others.

Gabby from Wyoming NOVEMBER 2, 2011
Keep your head held high, nothing can stop you. The key word is CONFIDENCE. listen to your heart and believe you can do anything!!

aniyah from saginaw MI OCTOBER 26, 2011
always follow your dreams no matter what

Jackson from Nairobi,Kenya MAY 31, 2011
Surely believing in oneself is a pre-requisite for happiness and personal development which we all look forward to.

Dennis from Glendale, CA U.S..A. MAY 23, 2011
A person can do just about anything if they just believe that they can :-)! This is what I am telling myself in the tough times of my life.

EVA Kramer from Indiana MAY 16, 2011
I LOVE EVERYTHING YOU GUYS SAY. JUST KEEP ON BELIEVING IN YOURSELF. "DON'T STOP BELIEVING" YOU KNOW THE SONG. GO AHEAD... SING!!!

ARACELI FRANCO from COMPTON, CA MAY 4, 2011
YOU HAVE TO BELIEVE THAT YOU CAN DO ANYTHING AND DON'T LET ANYONE DESTROY YOUR DREAMS, YOU CAN DO IT!!!

Sweet_Deeh from CA APRIL 3, 2011
If you don't believe in yourself, you'll never make it out.

Avianna from Tusscallosa MARCH 25, 2011
Believing in yourself feels really good

Stoino from Bulgaria MARCH 22, 2011
Believe in yourself, or no one else will!

Marvinp from Jamaica, NY MARCH 19, 2011
Whenever you are trying to achieve something worthwhile, people will always try to speak discouragement and doubt into your life but you can achieve anything you desire if you have the faith. Silence the doubters and believe in yourself.

Fran97212 from Portland, Oregon MARCH 15, 2011
What a wonderful foundation and that you implemented this idea is courageous. Wish your foundation the best and thank you for such an uplifting statement of humanity.

River from Sawyer MARCH 11, 2011
Believing in yourself is to replace doubt with hope in everything you want to achieve.

Alejandra Ramirez from Fort Worth FEBRUARY 26, 2011
I want my students to believe in themselves.

Neisha McDonald from Mississippi FEBRUARY 3, 2011
As long as I believe in myself then I can keep hope alive!!!

Cami from San Francisco FEBRUARY 2, 2011
Believing in your self is almost as hard as beliveving in others.

goeygumm24 from Canada JANUARY 4, 2011
Believing in oneself gets he/she happily through life and lights the light through hard times.