Explore the value of Kindness 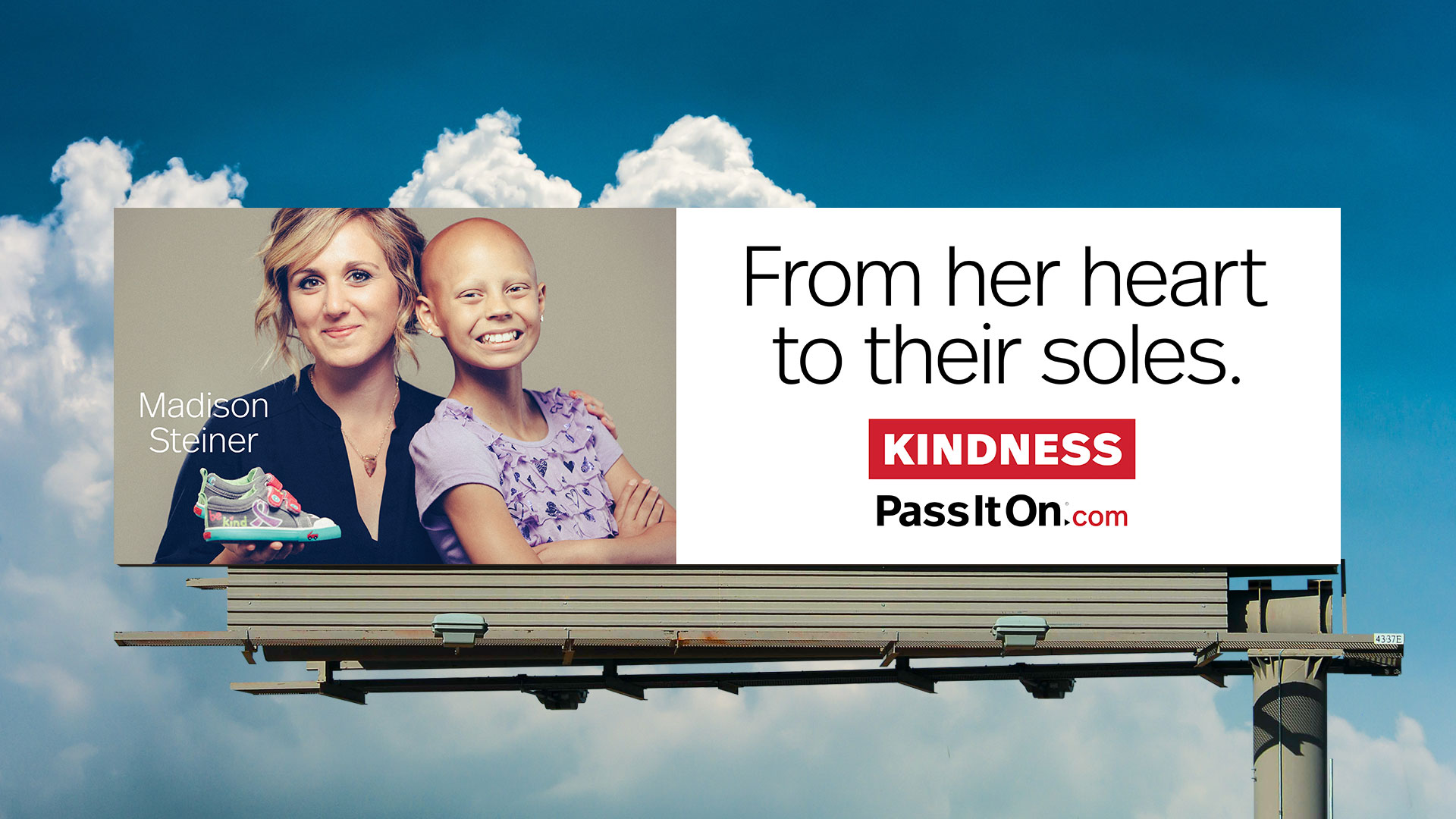 Our national billboard campaign features positive role models and uplifting values including kindness. Since we started in 2000, we've made over 70 billboards. Which one is your favorite?

Email
Your Comments
Don from Rohnert Park California  JANUARY 30, 2016
One day I saw a homeless man struggling with his few belongings so I stopped and gave him some plastic bags and bottled waters and 20 dollars and looked into his eyes and said life can be so hard sometimes can't it He responded yes it can I will never forget that look in his eyes

Franktonio from Mexico City FEBRUARY 10, 2014
3 simple tips: 1. Smile with eye contact to as much people as you can during your day. 2. Make honest compliments to every person you interact with. 3. Hug as long as people don´t feel uncomfortable. Do this and you will experiment a new kind of joy.

Osmond Aisien from Nigeria MARCH 9, 2013
I strongly believe that being kind can give to someone what hard work can't.

Tim from Chicago OCTOBER 25, 2012
(actually from my Niece - Christina): I give so freely of my time and resources not because I have extra, but because I remember how hard it is to have nothing. EVERYONE has something to offer, and yes even those of us that barely get our bills paid on time. If you lack money or time to spare, you always have kindness to share.

Clare from Kenya OCTOBER 5, 2012
Being kind to one another costs nothing.

antonio martins from SA, TX MARCH 28, 2012
"With a simple smile, you can be the sunshine in someone else's winter shade."

Marsha from So Ca MARCH 24, 2012
I would like to see adults, teens and children alike try to watch out for others. The bullying and disrespect of each other needs to change into what can I do to help you or I need a friend, do you? Let's all try to add friends not online but in person. I don't have enough friends. Online friends just aren't as much fun as the kind that can actually hug you. What do you think?

Jorge from El Salvador OCTOBER 29, 2011
I read Brynn comment, and I think that it is so powerfull, I going to try it with my students here in El Salvador, thanks

Penny from Boston, MA OCTOBER 9, 2011
My brother-in-law and sister-in-law have an autistic child. In order to participate in a fundraiser walk, they needed to raise some money. Only a couple of people had donated and they were quite discouraged. So, I took it upon myself to discreetly make some phone calls and send out an email to a bunch of family and friends to ask them to support my nephew. They raised hundreds of dollars and don't even know how it happened. They are now pumped about the upcoming walk!

Brynn from California JULY 14, 2011
I was a first grade teacher for eight years. At the beginning of each day, my students and I read a sentence we had written together at the beginning of the year and posted on the wall. The sentence was "Kindness is important!" That set the tone for the year-each day we noticed and acknowledged individual acts of kindness among the students. Our classroom was a happy place to learn!