Explore the value of Integrity 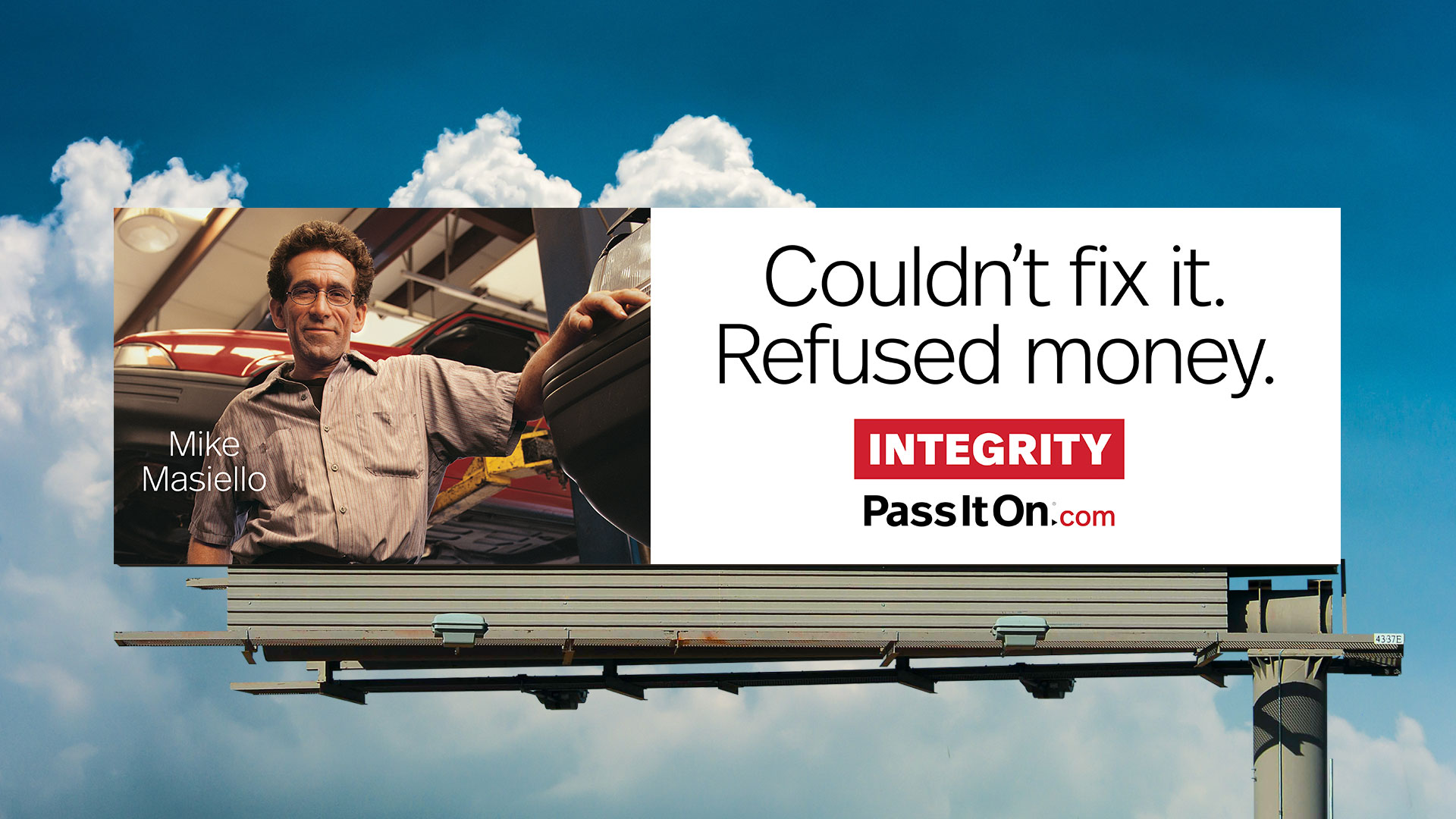 Our national billboard campaign features positive role models and uplifting values including integrity. Since we started in 2000, we've made over 70 billboards. Which one is your favorite?

Email
Your Comments
Ken from Illinois OCTOBER 20, 2016
you don't know how strong you are until being strong is your only choice.

J from K APRIL 4, 2016
Integrity is doing the right thing when no one is watching.

Bishop S from Indianapolis Indiana FEBRUARY 12, 2013
Integrity is doing right even when no one is watching!

Eric from Arlington, Texas OCTOBER 9, 2012
"Integrity is the recognition of the fact that you cannot fake your consciousness."-Ayn Rand. Remember that your mind and body are permanently integrated. If your actions contradict your convictions you are on a path to self-disintegration, i.e. self-destruction.

Lee E. from California APRIL 24, 2012
Definition of INTEGRITY 1: firm adherence to a code of especially moral or artistic values : incorruptibility 2: an unimpaired condition : soundness 3: the quality or state of being complete or undivided : completeness

Dustin from Waukesha, Wi FEBRUARY 19, 2012
integrity - is there anything else?

Kip from Dallas Texas JANUARY 29, 2012
Integrity means being integrated; showing the same face to everyone, including yourself.

Sharon from Bakersfield, CA JANUARY 11, 2012
Integrity is being the same person on the outside that you are on the inside.

Doug D from Indiana JUNE 4, 2011
Integrity is one thing no one can take away from you. To lose it, you make the choice to give it away.

Major Williams Tree from Michigan FEBRUARY 12, 2011
Integrity... is doing the right thing even when no one's watching...(see Character) :)

Kim N from Sacramento, CA FEBRUARY 7, 2011
Integrity is doing the right thing, not because you have to, but because you want to.

Sarah Mullen from the South FEBRUARY 5, 2011
I think more people should start giving themselves "integrity checks". Then they may start thinking before speaking or acting out of emotion. Once you do or say something,you cannot take it back, so think first and ALWAYS BE HONEST in what you are doing. If your ashamed stop!

Sal from LA FEBRUARY 5, 2011
I think a big part of integrity is doing what you say you'll do...keeping promises to others and to yourself...being true to your committments. I agree with an earlier post. Integrity is becoming extinct.

Beau Hodson from Chicago, IL FEBRUARY 3, 2011
Integrity is about looking in the mirror and holding yourself accountable to none other than... yourself.

Mr. Salcido's 7th Grade Class from West Covina, CA FEBRUARY 2, 2011
The truth can hurt, but sometimes its worth the cleanse of our souls.

h from az JANUARY 21, 2011
Integrity is doing the right thing all of the time

Carletta P from Maple Heights, Ohio DECEMBER 28, 2010
Integrity is an endangered species. It is almost extinct in the minds of people when contemplating their options to life's problems.

Donald u from Westfield, ma OCTOBER 15, 2010
Integrity is something that cannot be signed on a dotted line!

Jim E from Mechanicsburg, PA JULY 14, 2010
Integrity is doing the right thing regardless of the consequences.

Link, S from Briggsdale, CO MAY 16, 2010
I respect anyone who fights what they believe for, no matter how much I disagree with what they fight for.

David W. from Durham, NH APRIL 24, 2010
When I was a kid my father and I were watching a football game. I asked who he was rooting for, and he said, "I'm rooting for the referees."

Conrad M from Franklinton, LA OCTOBER 18, 2009
Integrity is doing the right thing when no one is looking.