Imagine the picture if Thomas Edison had given up on the light bulb! But failure didn’t discourage Edison.

See the billboard that inspired this radio ad. 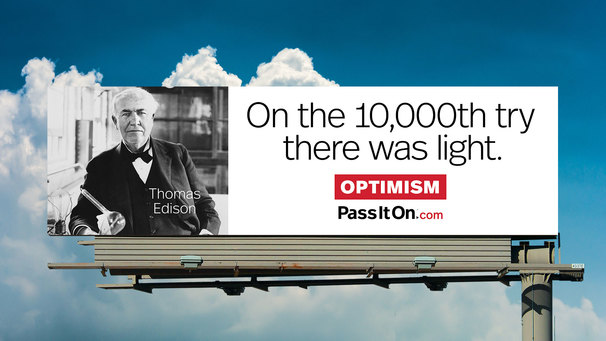 Imagine the dark picture if Thomas Edison had given up on the light bulb! But failure didn’t discourage Edison. Optimism…Pass It On. From The Foundation for a Better Life at Values.com.

Stations: Thank you for using the Live Read copy and airing the pre-recorded PSAs—we are happy to make these messages available for you and your listeners. Please note that The Foundation for a Better Life does not sponsor any type of program. Therefore, we ask that when using the Live Read copy or the PSAs please avoid language that indicates any sponsorship. We would appreciate your using the phrase: "This message is a courtesy of The Foundation for a Better Life at Pass It On.com."

Broadcast Media Pros: Be sure to check out our passiton-media.com website for broadcast quality media downloads.

Email
Your Comments
Nancy from NJ AUGUST 22, 2017
I like this F.B.L ad about Thomas Edison like his old saying and my personal favorite goes Genius is 1% inspiration and 99% perspiration

deven from colorado APRIL 26, 2016
Tesla was the idea begin the brilliance that was Edison... Just saying.

Dan B from Plainsboro, NJ JULY 15, 2014
It would not have been a dark picture if Edison gave up on the lightbulb as he was in direct competition with Tesla to bring it to market. As a matter-of-fact, Tesla was much more altruistic then Edison as he gave up royalties on his patent design in order to allow for further innovation. Thank you for allowing this space to comment as every time I hear this factually incorrect commercial it sticks in my craw.

Be sure to listen to our other Pass It On® radio PSAs.

All Pass It On® Radio PSAs