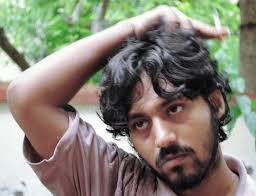 Anamitra Roy is a founding member of the independent film making group LITTLE FISH EAT BIG FISH which released a five film DVD in 2010 called: Five No Budget Films that included his own film: “Jean Luc Godard Had No Script”. Anamitra Roy is a firm believer in the alternative parallel cinema movement and a strong supporter of film as an art form not a commercial product.

Although I acknowledge that the industry is big and we all are a part of it --- the producers, the directors, the Indies, the anti-industry no- budget filmmakers…all of us… still some of us, I believe, do believe in some different logistics of filmmaking. I like it. For instance, we consciously oppose the language that is used in the popular films from India and we opt for even torrent releases to reach out to a larger audience worldwide. I want to overcome all the limitations and communicate.

Gradually I came to know about the initiatives worldwide during writing my dissertation paper for the department of Film Studies, Jadavpur University. I interviewed Michael W. Dean, Clive Frayne, Ian McCormick, Amir Motlagh and tried to interview Lucas McNelly, too, but he was busy with Up Country at that time and was unable to provide me with it. The Film Studies Dept. was another hell for me but I won’t like to discuss it here.

Man, how can some guys be so audacious to teach someone about ‘How to read a Film’?
If you know it, you got artistic talent and if you do not know, no one can teach you, that’s what I believe. Moreover, it’s not a good process to feed you from basic spatiality in films to Lacan’s psycho-analytic theory via popular Indian cinema and New York Underground in just two years!

Anamitra has made inroads into Crowdfunding in India. As of today he has made more than 150 producers for his forthcoming film "Little Fish eat Big Fish". He is a film Director, trendsetter, Simple, honest and straight forward.