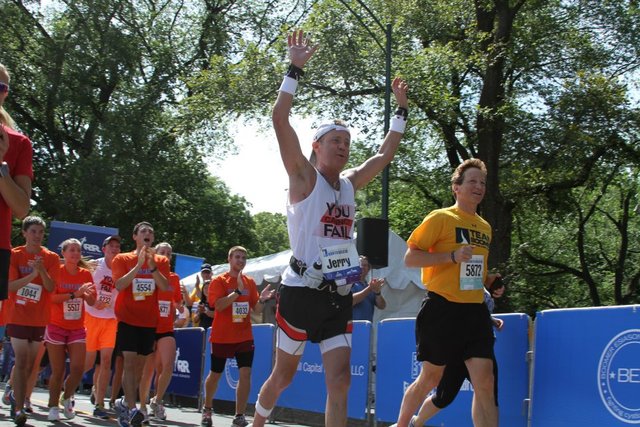 Advocate. Cystic fibrosis. Hero. Leader. Relentless. Hopeful. All of these words have one thing in common; they can be used to describe Jerry Cahill, a man who lives and succeeds in spite of his medical limitations.

Diagnosed with cystic fibrosis (CF) at the age of 11, Jerryâ€™s life was changed irrevocably. Doctors and other medical specialists prepared the Cahill family for the worst-case scenario, but Jerry was not born to a family who accepts defeat. With the support of his parents and siblings, Jerry has not only survived with cystic fibrosis, but has thrived.

In 2004, Jerry made the difficult, but health conscious decision to leave Joseph Abboud and refocus his talents elsewhere. This move led him to the Boomer Esiason Foundation, a charity that supports CF research and the CF community. Staying true to himself, Jerry became a leader at the Foundation and launched the Team Boomer â€“ Fighting Cystic Fibrosis athletic program as well as the Exercise for Life Scholarship.

Currently, Jerry hosts two podcast series, Jerry Cahillâ€™s Cystic Fibrosis Podcast and CF Wind Sprints. These brief videos focus on the cystic fibrosis community and offer tips for exercise, nutrition, traveling, and therapies. He is also a regular speaker at CF care centers, meetings, and conferences, where he shares his life story with others and encourages them to find their own ways to stay committed to exercise and medical compliance. On top of that, Jerry created a way for those who have or are affected by CF to share their stories with the launch of Club Cystic Fibrosis.

Jerryâ€™s most recent project, You Cannot Fail, includes an autobiographical book, a website, a new scholarship, a childrenâ€™s book entitled, â€œJerry, The Boy Who Could Not Fail,â€ among other ventures.

Jerry Cahill is now in his mid-50s and a year post double lung transplant; he continues to remain active in every way possible. He cycles, jogs, lifts weights, has run in two NYC marathons, has participated in two half Ironman Events, and still competes in pole vaulting, along with coaching pole vaulting at two high schools. Jerry continues to inspire not only those in the CF community, but all those who encounter him in their lives.