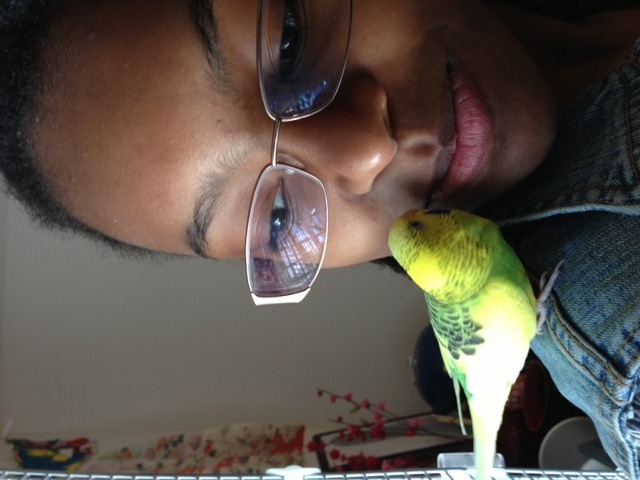 Young artist "AmaSepiaChan" is my 13 year-old daughter and my hero. She has shown
great courage, faith, empathy, generosity. Amaranthia
is African-American. She attended PAL Preeschool and Nishimachi International School in Tokyo, Japan. She returned stateside at 7 and was in culture shock until last year. During that time she was bullied. When she turned 9 she was diagnosed with High Blood Pressure and saw a Pediatric Heart Doctor. We did not understand what was going on until we received a call from her school teacher saying her blood pressure sky-rocketed and she had a massive nosebleed. Later, we found out these problems were caused from the stress of bullying at school as well as the return 'culture shock' she was experiencing from life back in America. Since she left at 4 to live in Japan, she only understood Japanese culture and expressed herself that way, but she looked African-American. Kids made fun of the way she dressed, the food she ate, one kid called her a monster and another spat at her. Through it all my daughter drew and sculpted She drew pictures of everything and sculpted her favorite Pokemon characters. I had no I found out this was the way she chose to deal with the bullying. Once I realized that she was using art to help her heal, I followed her lead. She kept going and now at 13 years-old she is beginning to get recognition for her work. She wants to help others to heal through art so she donated her artwork to raise money to help other kids. Just recently she developed a project titled, "Do You Know Who I Am?" to share her story and to encourage other kids to share theirs instead of letting others create a story for them. The presentation was done on an app on her IPad and utilizes the written word, her artwork and, of course, technology. It ends by asking. "Do You Know Who You Are?" taking the focus off of her and putting it back on the kids in order for them to figure out who they are. Recently she presented at the award ceremony for The Concord Trust and presented to most of the teachers in her school. The school's Administration is currently in discussion about whether her project can be used to help combat bullying. AmaSepiaChan is my hero because she found the courage to speak out, not only to help herself but to help other kids who might be hurting because of bullying. She gives me courage to stand up and fight for what I believe in no matter the obstacles. If she can do it for one so young, so can I. She hopes to carry this project to other schools in our district to spread the message. So far she has two speaking assignments for the fall.