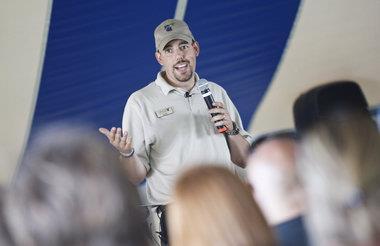 Ryan Prudhomme was called on April Fool's Day, 2011 by a doctor that he had stage 4 liver cancer- pretty serious. The doctor told him he had less than a year to live.
He was a natural speaker and used his ability to share story to people of all ages.
During the time he had cancer, on August 6, 2011, a group of friends put on a fundraiser called Rodeo for Ryan. Over 1,000 people participated even though it was supposed to rain. Rain fell north, south, east, and west of Grace Adventures, where the rodeo was held, but not one drop fell on the rodeo.
I met Ryan at a retreat at Grace Adventures. When he told our youth group his story, we invited him to our church. When he came, he met a girl at my church who had cancer. He inspired her and even took her aside to talk to her. He made a huge inpact on her life and mine.
He was a man of God and lived about 2 years. He died early April 8th, 2013.