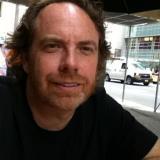 He is my hero because he has sacrificed more commercial endeavours to produce films that educate and inform like Trade of Innocents. He helped me overcome a fear of the stage and speaking parts by including me in Christmas dramas and was very patient about my nervousness, general clumsiness until I overcame my fears.

When in Grade 8, I could not remember my line for what seemed like minutes when probably was only seconds, until a prompter finally said it loud enough so I could say it. I was so embarrassed I wanted to dig a hole and crawl inside. But Christopher helped me crawl out by giving me small parts with no words, then a few words until I now actually love doing drama and wish I had more opportunities.

He is a man who dreams videos and then produces them! He produced The Enemy God to tell the story of a tribe that was not represented correctly in other films.

He is all about writing and directing films but even when times were tough he waited to find a meaningful story to be told on film. A man of sacrifice, patience and relentless talent.

He is definitely one of my heroes!