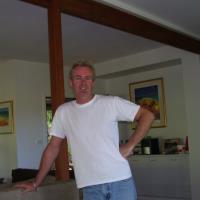 He lost his wife in 2006. But they found a cancer treatment used in hospitals in USA but not in Australia. He began petitioning to get it there. He lost his home and B&B at Byron Bay in the meantime. While doing all this he was helping Aussies (and a few Americans)get Cyberknife in Asia until we got it. Last yr he was successful. While the rest of the world had been offering it we were to get our 1st in 2013. He was also nominated for Australian of the year this year. He has also put out a book - Dying to get to Oklahoma, which is raising awareness and funds of Cyberknife for Australia. This single dad of 2 has been responsible for saving dozens of lives.