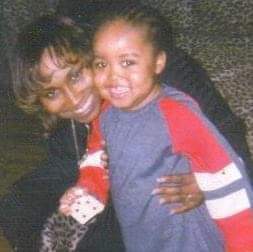 My nephew was born with an hole in his heart. His was repaired and he was given a pacemaker. Oh he thrived with that, his smile was amazing but he had problems and before he was three he needed a new heart. He received a new heart and the little baby smiled, as if his chest wasn't cut open. He smiled as if he wasnt hurting. I called him bighead and he loved it I was his Mooney. He was on so much medication to prevent rejection. He had to have test done where they went in and checked to make sure his heart was ok. And this baby never cried he wasnt a whiner at all. But he enjoyed laughing and having fun. I remember a night when I learned what things to play with with him and what not lol. We was watching tv and fresh price was on so I popped some popcorn and we were drinking apple juice. Sylvester looked at me and asked what I was drinking and me not knowing said im drinking beer smh. He started laughing and so I asked what he was drinking and he said beer too. Now remember it really was apple juice but I fell to correct him and tell him it was a joke. So my nephew went to his doctors appointment and told his doctor when asked what he did said my tete Mooney gave me beer and we got drunk. Oh my god my sister in law called me like I know you didn't give my baby no beer. At first I was so made because she should know I wouldn't give him beer but because he was so excited from his night and wouldn't know what beer tasted like even to begin with he had to endure extra test because even if they felt I didn't do that they had to be sure. I truly didn't know it would go that way. So when I saw him I explained about why I shouldn't have played with him like that and promised I never would again because I knew how those test made him uncomfortable and this little baby my hero said tete Mooney it's alright I knew it wasn't beer but the doctor wouldn't let me tell him that part. I drink apple juice all the time. His little body was weak from a sickness when he passed on Sept 26 2008 at the age of 6 years old. I won't ever forget my bighead who taught me all about courage strength and love I never knew you could love someone even before sight until him. I'm forever grateful to his mother for the wonderful care she gave him from day one. I will forever be grateful to the people or person who donated the heart to him. I encourage everyone to become organ donors because someone gave my nephew life I want to provide that hope to another family