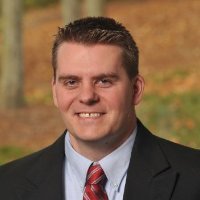 “The road to success is always under construction.” - Lily Tomlin Jonathan Nehls, my uncle and Godfather, is one of my biggest inspirations and one of my favorite people. I don’t have many opportunities to see him since he travels very far and very wide for his occupation. As the field operations manager at Mortenson Construction Company, he oversees the ground operations at construction sites. This high ranking position pushes him into a solid leadership role where he encourages, problem solves, collaborates, and makes decisions with people from all different places. As well as being a great businessman and critical thinker, he is also a very nice person. My uncle Jonathan is always very kind, humble, loving, and funny. Always excited to see him, I love listening to his stories from around the country.
As an adolescent he wasn’t very involved in school clubs except for playing three sports. He went to Northern Michigan to play football and receive his degree. After college he was hired by Mortensen and worked his way up to one of the top positions in the company. His position sounds like he is just a supervisor but actually he oversees several major construction sites around the country, helps design large scale projects Mortensen undertakes, as well as solving problems other sites encounter during their builds. Some of my favorite projects he has worked, designed, or fixed are as follows. He overlooked the United States’ tallest flagpole build outside of Sheboygan Falls in front of the Company Acuity. The Acuity company has continued with him as a build partner since he did a good job. During the planning of the new Minnesota Vikings stadium he helped design some of the structure and solve how they were going to keep the building cool, since it’s basically a giant greenhouse. The Twins’ Stadium also needed some help during their design process that he was sent to work out. Right now he is building a new elementary school and hospital in Milwaukee. I am very proud of all he has accomplished.
As well as being great at his job, he is always very kind. I don’t see him often because he travels but my uncle loves to watch me play basketball and my brother play football. He will sometimes drive eight hours to come visit with us and squeeze his time to the max. I am very grateful for his willingness to come visit with us because it shows how much family means to him, something I agree is important. My uncle does have a family which includes my Aunt B and my little cousin Evelyn. They are both stationed in Milwaukee right now, but because of his work he will sometimes have to leave for weeks at a time. My Uncle and Aunt are very supportive of each other and once he assigned a long term position he will be settled but right now they are just living and loving. My uncle’s positive attitude and great personality are always something I look forward to. He always has a cheerful smile and tells us funny stories. Even under all of his stresses he keeps a positive attitude and a great smile and I think that really determines why he can do his job so well. One day I aspire to be as successful and as happy as he has become.
I am very proud of what my uncle does and how he lives. My Uncle Jonathan loves to innovate, creating different projects and redesigning the infrastructure of the greater U.S. area. He has a very big heart and an even bigger creative mind. Jonathan is a natural leader and it shows in his work and how he is personable with different kinds of people. He is a very hardworking a loving man. I appreciate his dedication to being a man of his family as well as a business man. He loves his job and his family very much. I look up to him because he balances the important aspects of his life yet has fun doing what he loves.