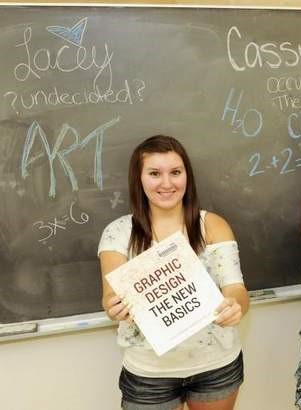 Role models are a huge part of our lives. Some are there from the beginning, and others come later on. I met mine when I was in first grade. Lacey Duckart was a 5th grader that I only knew as my safety patrol, or the person that walked me to the bus at the end of the day. I never thought she’d end up being so much more to me. At the beginning she was just someone I knew in my brother’s grade.
Fast forward years later to the summer before my junior year of high school. I got a job at Festival Foods to find out Lacey worked there as well. The reunion and connection were instant and in a short time we became best friends. Tied to the hip so to speak. With her being four years older than me she’s been through and is still going through more than I can imagine at this point.
When it came to deciding what to pursue after high school, Lacey was undecided as she entered UW-Manitowoc in fall of 2012. As time went on, she was drawn more and more to a degree related to art. She finally decided on Graphic Design/Design Arts and went on to UW-Green Bay to obtain her degree. Her support group has been minimal, as most do not see Arts as a degree or career, unless you are an art teacher. They don’t know or see the possibilities for the degree. Lacey began to slip in her pride and faith in her degree, debating about taking a new career path and thus adding on years of schooling and more college debt.
Her outlook on school has improved drastically, however she still has those times where she will second guess herself, but she pushes on. Taking classes in summer, going in to work on projects on the weekends, she does whatever to push through and succeed in her classes. At the rate she is at, she is planned to graduate in fall/winter of 2016.
She is my role model because she will teach you to never give up, and to never back down. She’s doing what she loves, despite everything against her. She’s taught me that to be happy in life you’ll go through a lot of struggles and obstacles, but when you push through you will come out on top and stronger than you started. With the right support and the right mindset, you can accomplish anything you choose to pursue. She has supported me through everything this past year. The good, the bad, the beautiful, the ugly, and so on. We have held each other’s hands in easy and tough times and I couldn’t be more grateful for a best friend like her. My role model can keep her head up in pride, take the curve balls thrown at you and accept what happens in life. She taught me that pushing things to happen the way you want it will never work out, you just have to see where your life will lead you.