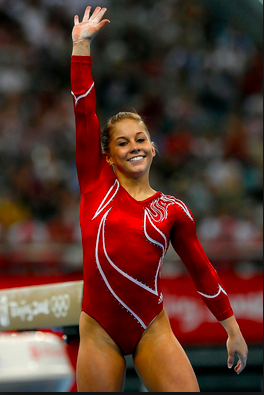 Shawn Johnson is one of the strongest girls I know to compete Gymnastics. She was just 15 years old when she competed in the Olympic trails. She went to the Olympics in 2008 and competed all four events with Nastia Luiken. She won gold for floor and beam. She also got another team gold medal so she had 3 in all. After the Olympics she was featuring on Dancing with the stars in 2009-2010. A year later she broke her growth plate while riding a jet ski of summer 2012. She made a comeback to gymnastics in 2013 competing at the American world cup. She fell on the bars but my second all around. After that she decided to finish out her season and then retire from gymnastics. She felt her body was wore out to much and wasn't as good as she was the first time. One of my favorite things about her is her confidence and how hard she works. She is one of those people who always has a smile on her face even when times are rough. She also took time away from gymnastics to help kids around the world get cleaner water. I think she has impacted my life because I wouldn't have known to actually try hard to get great dreams out of it and I hope one day I become somewhat close to how she is and her work, talent, strive to be like her in every possible way. Also one cool thing is I got to see her compete at the Olympic trails in Maryland for my birthday. She was even better to watch in person because she lights up the room like no other type of person. She always hugging people or dancing around just being happy is her. She has also taught me not to be afraid of failing the first time and to learn from your mistakes and not take them as a downfall. I think more people should look at her as a role model not just because of her achievements but also because of her always knowing what to do right and trusting her fate over her fear in everything she does throughout life wether it be in the gym or outside she is always positive.