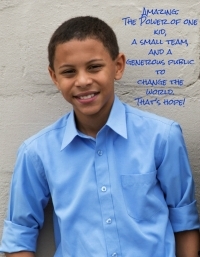 Jaylen Arnold is 14-years-old, but has been sharing his story for the past six years in classrooms, in the community, and all across the United States. Recently, Jaylen was featured in a segment for the Ellen DeGeneres Show, the feature cover for HIGHLIGHTS Childrens Magazine, and featured in People Magazine with Anne Hathaway for his efforts. In the past, he has been featured with Dr. Sunjay Gupta for a CNN special called the “Human Factor” and a documentary for Discovery Health called “Tourette’s Uncovered”. Jaylen has also been given the Young Hero Award for Philanthropy, The American Spirit Award from Katie Couric, and the highly esteemed World of Children Award. He is the inspiration of Jaylens Challenge Foundation, Inc. He created the concept at the age of 8, after being bullied for having Tourette Syndrome and Autism. He decided to take a bold stand. With the help of a few adults, he devised a plan to create a website to educate the public about the prevalence of bullying in schools and workplaces across the globe. It was soon realized that it was a plague that reached much further than his disorder and that children and adults alike were suffering on a daily basis. With his Motto “Bullying No Way!” anchoring his movement, he set out to change the world one person at a time by spreading acceptance of who we are by awareness and education. He believes “The more we understand each other, the more we will love the differences we have and the similarities we share.” To date, Jaylen has spoken to more than 120,000 students in face-to-face assemblies in classrooms and in corporations all over the world, while providing much needed anti-bullying curriculum.