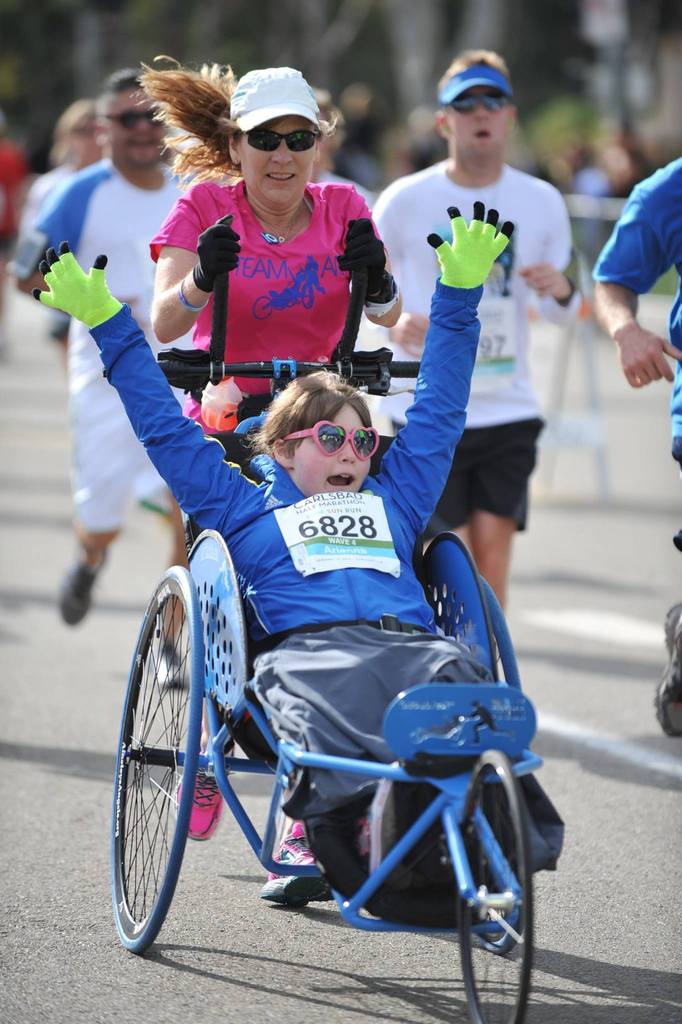 In a way, distance runners create their own magic.
They pull miles and miles out of their hats, and in full stride, they make energy gels seemingly appear out of thin air. Dedicated runners are able to multiply race bibs like white rabbits (though many wish they could multiply those hard-to-come-by safety pins, too).

In one of their greatest acts, the mother/daughter running duo known as Team Ari, has figured out a way to make disabilities disappear.

Kelli Tanghe, and her 15-year-old daughter, Arianna, created Team Ari, all out of a simple desire to run together.

Kelli made a promise to herself through it all.

"I said, when she learns to walk independently, I'll learn to run," Kelli said.

In 2006, Ari started walking by herself, so Kelli laced up her sneakers extra tight, and got to running. Both mother and daughter got to experience a new way of getting around in their worlds.

With her husband, Michael, and her two oldest children, Lindsay and Nick, who were heavily involved in high school athletics, Kelli had some good support and motivation as she tipped her toes into the water. In fact, Nick paced her in her very first 5K.

Kelli enjoyed it so much that she stretched her legs into the world of half marathons, marathons, and even a couple of 50-mile ultra races. In her eyes, one of the real perks of running was being able to run with Lindsay and Nick.

"Nothing replaces the feeling of running with my kids," Kelli said.

The only problem was that because they didn't have the necessary equipment, Ari wasn't able to accompany her mom on the roads. However, she never let up on asking to go.

"Every time I went out on a run, she would say, 'When am I going to be able to run with you?'" Kelli said.

Ari entered middle school in 2012, and it was a very difficult time for her.

"She wasn't able to keep up with her peer group," Kelli said. "She was becoming much more aware of her disabilities. We were trying to help her and figure out what she could do where she wouldn't have to sit on the sidelines anymore."

Despite not owning an adaptive running chair, Kelli wasn't going to wait until they could afford it, so she signed up for a 5K and pushed Ari in her wheelchair.

Serendipitously, the race benefited their local children's hospital -- where Ari had spent countless hours during her childhood.

"She loved it," Kelli said. "She had a sense of freedom that she hadn't had before. She put her arms up in a victory pose as we crossed the finish line, and immediately said, 'When can we race again?' as I was still catching my breath."

Right away, Kelli saw a change in Ari when she said, "Running makes my disability disappear."

Just like that, Ari was reborn. An initial birth characterized by some trauma paled to the triumphs found in running.

Because Ari loved running with her mom, she kept asking to go longer and longer distances.

An adaptive running chair was a must, so the family found room in the budget.

Within a month, the two crossed the finish line of their first half together.

"It wasn't that difficult," Kelli said. "It was easier than I thought it was going to be. Her enjoyment of it far outweighed any discomfort that I had."

Kelli and Ari talk about everything on their runs.

"She's a little chatterbug," Kelli said of Ari. "I say that running is our family therapy."

Because of her visual impairment, Ari is very auditory. She often sings her favorite songs as her mom pushes her, and she will even point out things that Kelli wouldn't normally hear or notice.

A Sport for All

"She's not as shy in speaking to people anymore," Kelli said. "I think she's happier that she can participate in a sport as opposed to just watching or sitting passively on the sideline. I think she has much more social interactions because people approach her."

Spectators and other racers often tell Team Ari about their own stories of family and friends with cerebral palsy, or who are bound to a wheelchair.

"They ask, 'How can we do that too? How can we get our loved one involved?'"

That's another reason why Team Ari has no plans to stop anytime soon.

In February Kelli and Ari did a half marathon in San Francisco that had a physically challenged division for athletes.

"We were competing against different ages of challenged athletes, and that really helps individuals who are challenged in knowing that their accomplishments can be awarded too," Kelli said.

In early April, Ari won a challenged athlete grant that will enable her to get started on her next endurance quest: Completing a triathlon by the end of the summer.

Kelli plans on using the money to acquire a chair that can be towed by a bike, and then convert to an adaptive running chair.

Until then, they'll keep rolling along, letting the magic fill the air, all the way to the finish line -- which actually is just another start line for Team Ari.