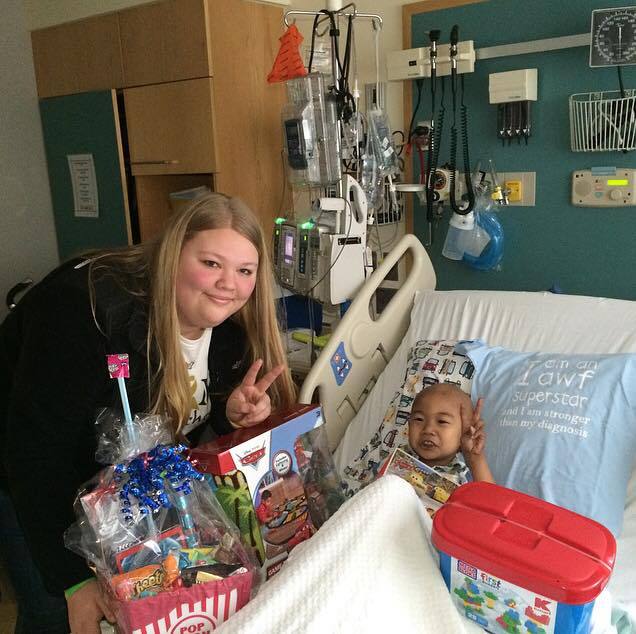 I have had the opportunity of being best friends with an amazing and inspiring young adult named Sarah Cahill. She is currently 18 years old and has been a huge role model for not only me but thousands worldwide. Sarah is the most selfless person I know, and puts ALL 110% of her effort into helping other families. She is devoted to changing the world by bringing hope, and happiness to children with cancer and life threatening illnesses. Sarah was 15 at the time her brother Johnathon Cahill was diagnosed at 18 months on May 15th, 2012 with stage four liver cancer that spread to his lung. The only day Sarah cried was the second she found out her little brother had cancer from there on she decided to show the world the meaning of strength. She is known for her quote," You have two options: You can sit there and cry or you can get up and be the difference. I chose to be the difference." She certainly follows this every day. Sarah says, “After endless dark days in the hospital she watched a miracle happen her brother Johnathon always smiled, he grew to love all his nurses, loved his bald head, and wears his scars proudly.” (Via the Hope For Johnathon facebook page) As of November 9th, 2012 Johnathon was declared cancer free. He proved to doctors that he was more than numbers and beat all his odds Sarah's hero is her little brother, and she would do anything in the world for not just him but any family dealing with pediatric cancer. Both Sarah and Johnathon have motivated over 95,000 people through social media. They spread the meaning of living life with kindness and positivity. Sarah was beyond thankful by the outreach of support through a facebook page she founded in 2012 called “Hope for Johnathon” that was originally started to update everyone on her brothers condition but since then has turned into so much more. After the outpour of love and support from everyone when her family needed it most she decided to give back. Sarah is the current founder of the MoRE Hope for Johnathon Program. She has donated over 260 movie baskets to children throughout New York. She drives sometimes over an hour to bring a child battling cancer or a life threatening illness a basket just to cheer them up. But while most would just drop the basket at the door that's not what she does. Sarah spends quality time with the child, gets to know them, and for once makes them feel as if they aren't sick. While most kids her age are out at parties on a Friday night Sarah is out spreading smiles to sick children. Sarah is truly impacting the cancer community positivity. I couldn't think of anyone more deserving. Sarah Cahill defines the word inspiration. She is making the difference.