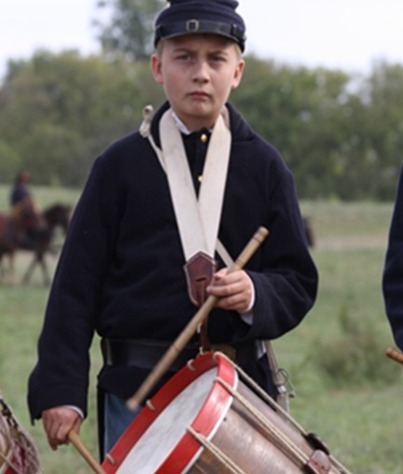 Hello. My name is Steve Berger and I am hoping to share a hero with you. His name is Andrew Adams, he is 14-years-old and he is my neighbor. I know the family pretty well. Andrew is doing something pretty incredible and I can't believe a 14-year-old came up with such a vision. Andrew is already doing his Eagle Scout Project; from how I understand it, most scouts aren't approved to do this until they are 17. His project? Building a drummer boy memorial at the National Civil War Museum in Harrisburg, Pa. Andrew is a civil war reenactor and has given me the history of drummer boys (they did a lot more than people think). Apparently the drummer boy is not featured in any memorials throughout the United States. Most people would simply demand a memorial, but Andrew took it as a call to action. He has the land donated to him and has already raised $15,000 of his $30,000 project.

Now, I was boy scout for 2 years. I know the basics of the Civil War, but I would fail the "Civil War Buff" quiz. Simply put, it would affect me very little if this memorial is build or not, but I know that it would impact many as I am aware of the number of tourists that travel to Gettysburg and the museum in Harrisburg. Most importantly, I am blown away that a 14-year-old boy is championing such a monumental task (pun intended). When I was 14, my parents would be lucky if I mowed the grass! I just keep thinking of your organization when I think of Andrew. You communicate of core values that make our communities better. I see your billboards everywhere and I rather enjoy them. I can just see Andrew being a billboard: "Built a Memorial When He Was 15- Making a Differnce." I think what he is doing parallels your messaging and mission. My real hope is that you have read this far and are thinking of ways that you can help Andrew. The help could be in the form of funding, raising awareness, or encouraging Andrew and his project.

Andrew and his family have no idea that I am reaching out to you. Again, I am just so impressed by his efforts that I am quietly trying to come up with ways to help. My hope is that you feel the same. More information on his project can be found at http://www.unitypark2015.org.