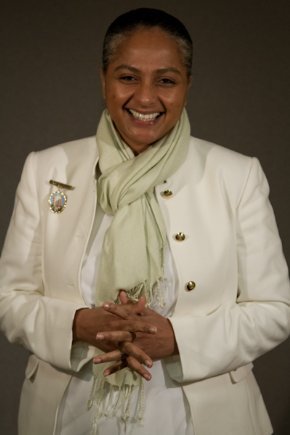 Sister Jenna is the founder and director of the Meditation Museum, a non-profit organization which has been active in Silver Spring, Maryland since 1997. It features interactive displays of various faith traditions and offers tailored training sessions providing tools for personal development. The Museum hosts a variety of conversations, workshops, special presenters and meditation sessions on a weekly basis which are attended by approximately 200 people per month. All course offerings are free to the public.

The workshops address challenges and concerns of residents of the community and offer suggestions to assist people in facing and resolving obstacles. Those who attend the Meditation Museum’s workshops and events reflect the diversity of the community with representatives of various races, ethnic backgrounds, socioeconomic backgrounds, religious and spiritual traditions and ages ranging from teenagers to senior citizens. Additionally, it attracts residents from the local community as well as visitors to the Nation’s Capital from around the world.

In June, 2012, after acts of violence at the Gurudwar Temple in Oak Creek, Wisconsin, and the Aurora, Colorado shootings, Sister Jenna, noted that the country is in need of reflection, silence, meaning, and personal power, more than ever before. She then launched a nationwide initiative entitled “America Meditating” which aims to build a country that is a more peaceful and safe place and encourages people to set aside time each day to pause for inner self-reflection. As she often says, “A more peaceful individual equals a more peaceful world.” Events were held in Washington, D.C., Los Angeles, California; San Francisco, California; Bel Air, Maryland, and Hawaii.

Over the years, the Meditation Museum has been active in working with various non-profit organizations, interfaith communities, local and federal government, and scientific areas. For the past 16 years in the area, 14 citywide initiatives were launched and subsequently became global. The Museum has brought much attention to the importance of becoming a more value-based community with local and global trust and cooperation amongst all. Sister Jenna and the Meditation Museum are extraordinary and inspiring examples within our community.

A few years ago, a young man came to sell videos at the museum and although the Museum does not generally accept solicitations, they did on this occasion. After a month, the young man approached Sister Jenna, and shared that he was living out of his car. Sister Jenna arranged for him to stay in a lovely million dollar vacant home in Mclean, Virginia, for two years rent-free and worked closely with him to regain his self-confidence and make him marketable in the workforce. He eventually gained employment and moved to his own apartment. He is now independent, standing on his own feet and continues his studies at the Museum. The story here is that Sister Jenna has a tremendous heart. Over the past 14 years, proclamations have been issued from local and national government officials to recognize the Sister Jenna and the Meditation Museum for the commitment to serve humanity and work for positive change.