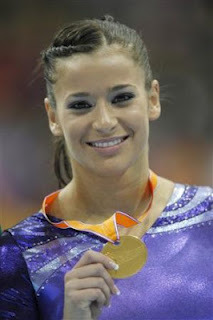 Of all of Alicia Sacramone’s heroic attributes, determination is the one that sticks out most of all. In 2008, on her balance beam routine she fell during her mount onto the beam. She did not cry and she did not waver for the rest of her routine. She got back on the beam without skipping a beat and she stuck every difficult trick throughout the rest of the exercise. Alicia is a prime example of determination and gives hope to those who have failed and were too scared to keep going. She wasn’t. She kept her head up when she had every reason to give up her dream. In 2011 Ms. Sacramone earned a gold medal at the Visa Championships in Saint Paul. She medaled in the same event she had fallen in four years earlier at the Beijing Olympics, the balance beam. Had she given up on her dream and hard work after one mistake, she never would have reached her full potential as the most decorated gymnast in the history of World Championships. Alicia Sacramone has flourished in many aspects of gymnastics and she has proven on multiple occasions that determination is a key component to her success on the beam and in her everyday life.
“Keep your head up” should be Alicia’s motto. She began competing in gymnastics when she was eight years old and she was fortunate enough to not disappoint in the Beijing Olympic Games, sixteen years later. Ms. Sacramone brought home a silver medal with her team in 2008. In 2011 Alicia Sacramone tore her Achilles tendon but competed sooner than her team coordinator thought she should. Yet through her display of magnificent determination she has had the struggle of doing her everyday duties, just like the rest of us. She had to write papers, take tests, and study hard for exams. After that she would help coach some of her fellow Brown gymnasts. Her determined spirit is what kept her pushing forward through homework and striving towards perfection on the gymnastics floor. Some say she is a “gracious teammate and a fierce competitor.” As a result of her dedication to hard work (determination) she has been voted Sportswoman of the year three times. Alicia Marie Sacramone has proved the very definition of determination time and again. Ms. Sacramone had every excuse not to finish her balance beam routine in 2008. What allowed her to persevere through the rough patches in her life and finish that routine? Determination.
When I feel like I don’t want to complete another repetition in the weight room because I feel I can’t, or I feel I can’t run another second because I think my legs may not carry me; at that time I think of Alicia. I remind myself to not give up so easily. I’m not performing before the entire world; I’m going against myself. I can do it.