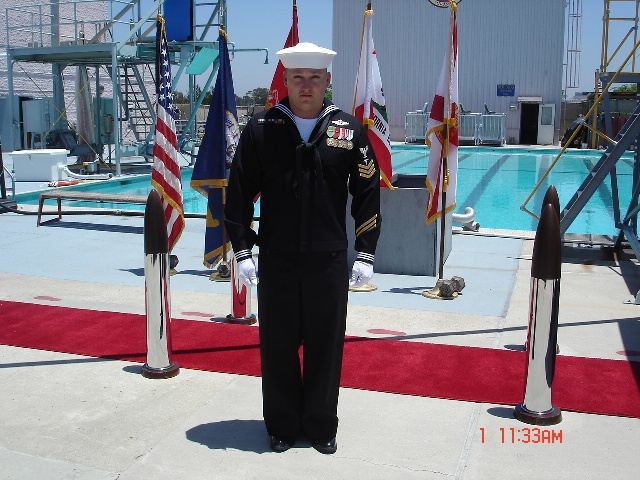 My husband is a wounded retired Iraq War Vet. He recently retired in July 2013 with multiple disabling injuries. 20 years ago he was a young man playing college baseball at Georgetown College with the dream of getting his chance to play in the MLB. After playing two seasons of baseball he left college, before he had a chance to speak to MLB scouts, to pursue what was more important to him...defending our nations freedom. He sought out a Marine recruiter and told him he was pre-med in college, but wanted to join the service as a medical personnel. That same day he signed with the US Navy as a Combat Corpsman (medic). He continued to play baseball and softball with the Marines even helping to form a team in Iraq to help bring up the moral of combat. Injury after injury and surgery after surgery he knew his chances of ever playing professional baseball diminished with every tour. He continued to coach our 3 sons youth baseball teams. Even coaching from the stands from a wheelchair after having a total hip replacement. His love of the game would never be taken away from him, though his physical abilities became limited. He's coached travel teams from 8u to 15u. Once he retired he knew he could take the leadership the military instilled in him and turn it into something big...something positive for youths. He began to pursue his Master's degree in Coaching and Athletic Administration. It was there when he realize he wanted to be a high school baseball coach. Not just a coach, but a coach for athletes who needed extra guidance or a positive role model. He wanted to do more than teach the game he loves. He wanted to make a young high school player who has given up on himself believe in himself and prove the world wrong. He has been given the opportunity to turn one small "inner city" type baseball program around. The school is not a "funded" school. There is no money for baseball. The gear is old and unsafe, the fields are city fields borrowed by the school, which are kept up by the players and coaches. There is no locker room. Just a tin storage container covered in dirt from cleats. The players don't have all the best new gear. Most have shared gear or practice clothes. They carry their gear in shopping bags or their school bags, not baseball bags. Some are wearing the same small cleats they've worn since middle school. They have a different socioeconomically background. Not just a single parent home, some don't see their parents on a daily basis. They play baseball for the out and for the brotherhood of belonging to something. It doesn't bother them that they don't have all the best equipment or uniforms.Their current uniforms are over 14 years old or older. My husband goal is to give these boys a reason to play, a reason to fight, a reason to show their pride for their school, for their team, and themselves. The school hasn't won many games in years past, but now they have learned to play as a unit instead of for themselves. Southern California is a very competitive baseball area and now these boys are learning how to compete. They give him all their hard work and he gives them a positive learning environment along with his knowledge for the game to help build productive members of society who know their self worth. All while volunteering and not receiving a dime in return. I feel the least I can do is show him his dedication has not gone unnoticed.