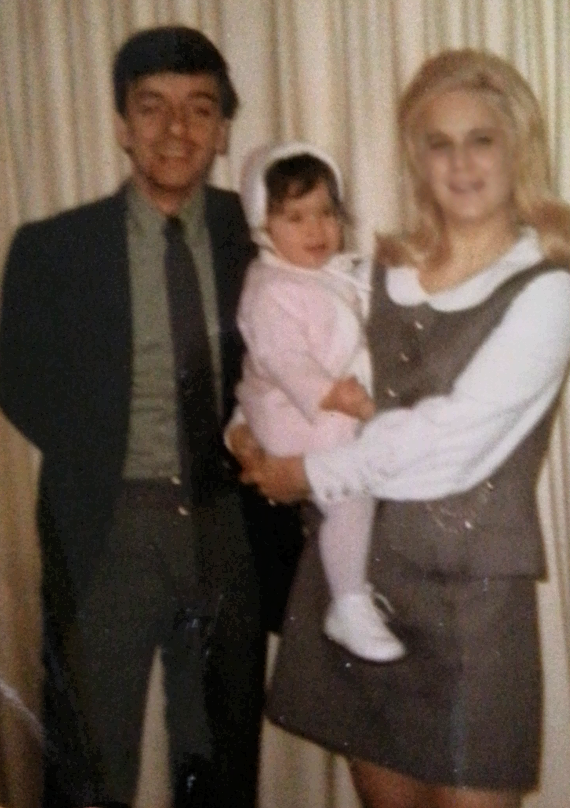 The first picture is of my mother with my father and myself as a baby. My mother gave birth to me in Fort Knox, Kentucky, while my father was stationed at Ft. Knox army base waiting to be called to The Vietnam War. He was drafted. As a young woman of 18 year's of age, she left her family and friend's to go with my father to Kentucky, where she knew nobody. My parent's marriage failed a few year's later. My mother and I , with no resources, found ourselves living with my maternal grandparents. During this time, my grandmother had a stroke . My grandmother waa a mere 50 year's of age and had a history of mitral value disease and replacement due to rheumatic fever in her childhood. My grandfather was having difficulty and overwhelmed. During this time, he had asked my mother and I to leave. My mother forgave him? Immediately. But, in survival mode, she swarched for living quarters for her daughter. We ended up luving with my paternal aunt and her family until my mother remarried. She remarried with the hope and excitement that any new bride has. Unfortunately, her husband became an abusive , physically and emotionally, alcoholic. They had a child in 1975, my sister. My mother hid the abuse from everyone. She was attacked, brutally, on a continuous basis. The only one's that knew the truth would be those of us who lived within the house and witnessed it, helplessly. With a mere high school education, my mother sought gainful employment . During this time, she saved enough money until she could leave my stepfather. Once she thought we were safe, she was stalked etc. Back then the restraining order in which she possessed meant little to the police. She moved herself and her children to a different county within Pennsylvania for yet another fresh start. Without a college education she still soared within the corporate world of insurance. Her reputation proceeded her. She lost her mother when she was in her 30's. My grandmother was her best friend and confident. My grandmother died at the age of 60 from a surgeon's error during her miteal valve replacement. Throughout her tumultuous life, she always told me that I was capable of anything that I wanted, regardless of what others said. My high school grades were awful. My SAT scores less than desirable. And, when I graduated high school, I was told that I would amount to nothing by many. But, never by my mother. I went to community college for one year to "prove" myself. I had over a 3.0 grade point average. I was accepted into both college's I applied to, directly into their bachlor of science degree in nursing program. I transferred all of my credits, moved into campus and graduated with my BSN, three year's later. I then passed my state board's the first time. I was officially a registered nurse. I did this without skipping a beat. I graduated high school in 1986 , followed my University graduation in 1990. I still believe, to this day, because of my mother's parenting, that one can accomplish anything they put theirr mind to if one wants it badly enough. I am living proof! My mother cared for my grandfather during his diagnosis until his death from mesothelioma. Shortly after, she moved to Florida to be closer to her children and grandchildren. She wasn't know in Florida , professionally, as in Pennsylvania in the cooperate world. She ended up having to take a job at a local grocery store . She did this with pride and humility. I could continue this story for pages upon page's. Rught now, my mother is 66 year's young. She just celebrated her 66th birthday on February 11 th. . My mother was diagnosed with stage three inoperable pancreatic cancer in July of 2013. During this horrific time, I have witnessed and continue to bear witness to the strongest woman I know, push through her fears of chemotherapy, countless physician appointments, numerous procedures. My soul has been heavy as I have witnessed, first hand, the pain, fatigue, and physical changes associated with my mother's illness and treatments. I hear her saying the same mantra she has had ever since I can remember, "There is always somebody worse off and somebody better off." She doesn't wallow in self pity. Instead, she continues to fight for survival. I cannot begin to express the admiration and respect that I have for my mother. She is a woman of courage, grace, eloquence, and a survivor. Her entire life journey has been peppered with difficulties and challanges that I can't imagine most living and still smiling. I know this because, being only 20 year's younger than my , precious, mother, we have spent most of our lives growing up together. She is my hero. And, my love for her is , so, strong that I imagine that it will be felt long after my own life ceases to exist.