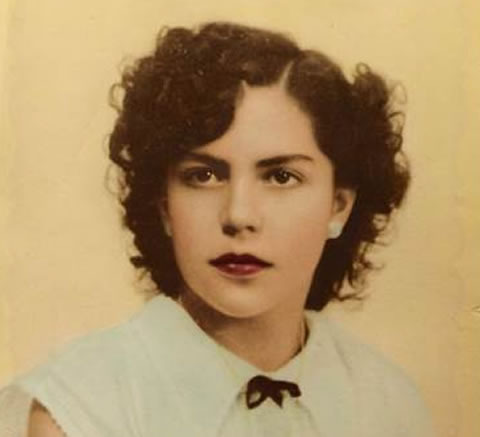 My grandmother was the holiest person I've ever known and she is my hero. She was born on November 7, 1933 in Monterrey, Mexico. She was the second of eleven children. When she was in school the girls had to learn how to sew. Her sewing was beautiful. The back of embroidery never looks that good. The back of hers was just as nice as the front. I always pray to her when I am sewing.

She married my grandfather on August 6, 1957. They moved to Chicago. My grandmother spoke no English when she first came to this country. She studied very much and took classes and soon she could read and write in English. She had nine children and 33 grandchildren. She took very good care of her family and was a great cook. She was always cheerful and willing to help others. She would pray multiple rosaries daily. She brought many people back to the Catholic faith.

Later on she got very ill and died of Alzheimer’s. In Mexico it’s very common to have a little shrine with a holy image in your home. When somebody is sick or dying a photo of the person is added to the shrine so that the family can remember to pray for the person. When my grandmother was dying, her brother in Mexico added a picture of her to his shrine. He added white roses too. The roses were on the shrine for two weeks. Typically cut roses do not last more than a couple of days before they wither. Day after day the roses on the shrine looked as if they had just bloomed. Her brother and his children were amazed at how beautiful the roses were after so many days. They should have died a while before.

On March 19, 2012 the feast of St. Joseph at 3:00, the hour of Divine Mercy and of Jesus’ death on the Cross she died. When her brother learned that she died at 3:00 PM he could barely believe it. Right at 3:00 on that same day, March 19, the roses withered and died. At her wake and funeral there were many, many people. Some of those people told us stories of how my grandmother had helped them in their lives. Women told about how she would accompany them to school meetings and doctor’s appointments so that she could translate from English to Spanish for them. Men told about how they had learned a lot from her and my grandfather when they gave talks at the parish or school on parenting tips. My uncle said that one thing that was amazing about my grandmother was that even though she had helped so many people her own husband and children never felt left out or neglected. My aunt said that my grandmother would often say, “If you make time for God first you will have time for everything else as well.” My grandmother made lots of time for God so I guess she always had time for everyone else too.