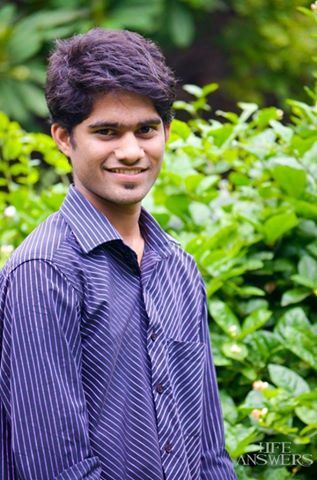 My hero is a small guy who always says a beautiful quote “Happiness is contagious.” He holds an Ngo “ONENESS ORGANISATION” (www.oneness.org.in) which works for the unification of people through charity. When I first met him & asked what is his inspiration for setting up an Organisation he says ‘smile is my inspiration.’ He is youngest person to lead an Organisation which he started when he was in his 10 Th standard, an Organisation which would help people, an Organisation which would teach people what love is, an Organisation which gives hope when they are shattered. His words are inspiring that would make the soul passionate. I remember once I listened to his speech where his words went deep inside my heart:
“Human has advanced to a very long extended that we invaded the universe but so sad that we could not invade the problem in our family, we could build high towered walls but unfortunately we also build walls between hearts of the people, we could construct bridges connecting continents but so sad that we could not construct bridges between hearts.
So long all our history teaches that Nations fell down because people weren't united, kingdoms rose because people were united. We read & we left. When I was a small guy I was thought that atom is the smallest particle ever possible but here in this world I see people were being broken in still small pieces, smaller than atom. Then I decided to work, and then I made a decision to stand and make people united. We worked together unifying people together in heart and mind showing them how world would be if all are united. Heaven would descend.”
His words are my inspiration. He leads the Organisation in spite of all the odds. He was told he will fail in his education which will ruin his career. He smiled and believed in himself. He made a step and raised the banner. Now his Organisation has done 70 projects helping people all the way. We are his people a troop of 1500 young minds who are walking with him. His works not only helped people but he taught us “if people work together nothing is impossible, if people work together world is heaven where smiles running on every face.”
He is my Hero.