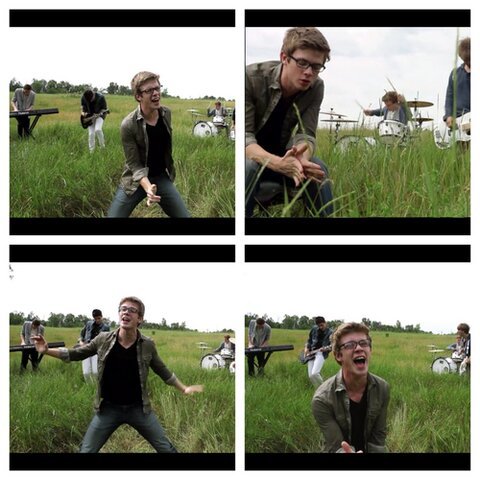 Sam Miller deserves this honor more than you could ever imagine. He is the lead singer for, “Paradise Fears,” an independent band hailing from Vermillion, South Dakota. With a single glance at any of the songs he’s written, and you’ll know for sure he’s a hero. Back in the summer of 2013, I was in a very bad place. I had no motivation to accomplish anything, and pulling myself out of bed every day was more of a challenge that I could ever explain. There’s so many more details that I won’t go in to, but, bottom line, I felt that I had nobody. Then one day, I found a song called “Sanctuary.” I remember every moment of it. I remember hearing his voice for the first time, and knowing that this was the start of something incredible for me. I remember thinking how angelic and soothing it was, and how the lyrics spoke straight to my soul. The song made everything else stop for just a moment. It’s as if, while this was playing, nothing else mattered. The song overruled everything that was tormenting me inside for a few minutes, and for once, everything felt ok. I had hope, and a reason to not lose it, because, like Sam said in the song itself, “even broken wings can fly away.” Since then, I’ve felt considerably better. I’ve listened to every song they’ve ever released a thousand times over. With each new song comes hope in a new melody. This band’s music is my escape from everything. My best friend agrees, as she once told me that their song, “Battle Scars,” “can fix anything and everything.” The music produced by this band is more therapeutic than any actual therapy could ever be. I know I’m not the only person who feels this way about them, too. Just ask anyone in the fandom. This is just my story. There are countless more out there, all you have to do is ask. Overall, Sam and the band have continued to climb in popularity and supporters. I think I speak on behalf on every single one of their fans when I say they deserve nothing less than the best. With their acoustic tour about to start in February, I’ll finally be able to meet the people who saved me, and tell them just how much they mean to me and so many more.
Looking down at the field, “Choose which value your hero best represents,” I don’t know which one to pick, because in all honesty, Sam Miller is everything all rolled up into one hero. I thought I should go with "great music," but he's much, much more than that, and no words can truly describe what he means to me and others.