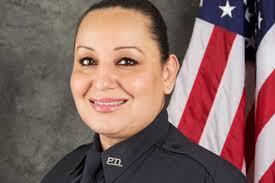 Ann is a remarkable woman, who has served her country as a U.S. Marine and now serves as a police officer in Stafford, Texas. Recently, during a traffic stop, she was shot twice by the driver's side passenger. One bullet in the face, the other bullet hit her bullet proof vest. Any officer would have been fine to stop in shock right then and there. Not Ann! After returning fire, she continued to pursue the suspects for 20 miles. One suspect was arrested at that time. The others have since been caught. She never gave up. Despite her injuries, she wanted to keep people safe. She had courage under fire!