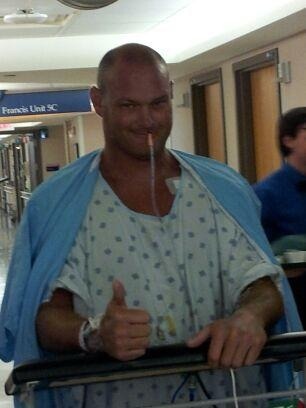 My hero is my friend since the first grade. What truly makes Tim an inspiration is the optimistic fight he has within him. It has enabled him to beat cancer two times before and recently was diagnosed for the third time and underwent an operation this Summer in which they removed his entire stomach .
He was first diagnosed with Acute Lymphocytic Leukemia in 1998. His brother, Brian, helped save his life by donating stem cells. Just two years later Tim relapsed; once again his courageous spirit and love for life helped him rally back and beat the cancer in in 2001. Tim has an amazing outlook on life and is optimistic about his diagnosis saying, “I’ve always told myself that with God’s grace and my love for life that I can get through anything." Tim has never complained and is truly a hero to all those that love him.