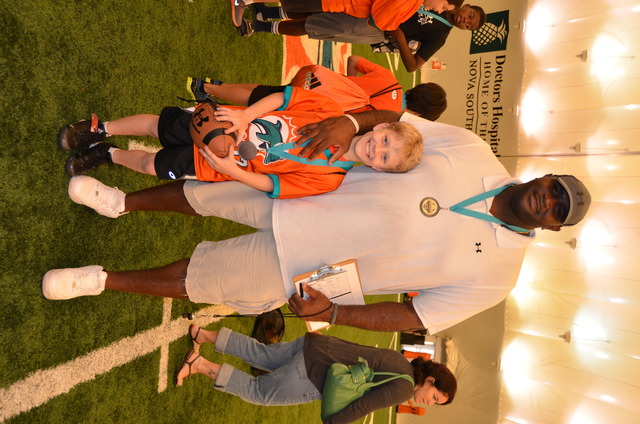 Coach Dray was a coach for the kids ages 10-14 for the Miami Dolphins spring break camp. My son, Jacob is 10 years old and one of the smallest children participating in camp. Jacob has been bullied for the past 2 years in elementary school so we were very reluctant to send him to camp. His self-confidence and self-esteem were at an all-time low when he started camp after a very difficult school session where the principal actually changed his class. As a very small and inexperienced player, Jacob did not have the skill nor the size of the other children. Despite that, he played with the spirit of a warrior. The team made the playoffs in a single elimination tournament and Jacob was off to the finals. When the other team clearly had the lead, Coach Dray coordinated with the opposing team to get the ball to Jacob and let him score. Had he been tackled, he would certainly have sustained a fracture. Jacob is 59 pounds soaked wet! Jacob had no idea of the "plan" and when he hit the end zone he had his very own celebration and was easily hoisted above the shoulders of his team mates. Coach Dray gave Jacob the game ball and he is still sleeping with it every night. He went back to school walking on clouds and Coach Dray made this happen. Dray worked with his team as well as the opposing team and coach to make something so special happen for one little boy. Of course Jacob thinks he is a future linebacker..... Coach Dray made the difference in the life of a little boy, he made an impact that will last a lifetime! I am forever indebted to this man who taught all of the children that day that it is not only how you play the game on the field, it is what you do off the field and for others that counts just as much. Coach Dray is our hero. He will be a hero to our family forever!