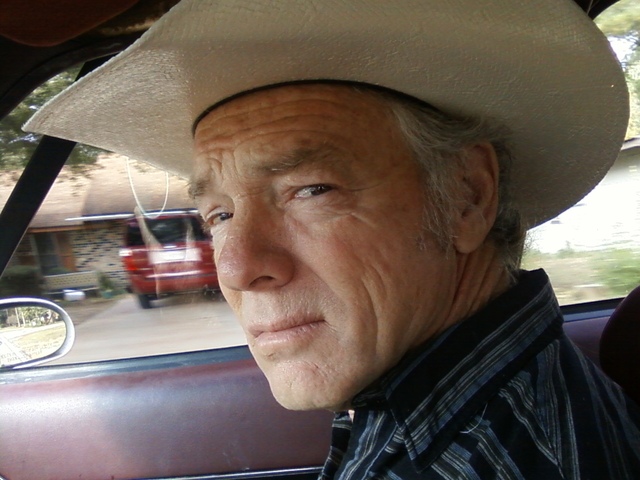 My husband is my hero. When we first met each other in 1996, all we seen of each other was our backs in a truck stop, in which I was determined that I was gonna get to know him. So I went to work there after being gone for a month in Germany with a friend. We knew that both of us was meant for each other. He was a truck driver at that time in our lives, he is a true cowboy, a great father of 3 children of his own and a great dad to my 3 children. We were married in 1996. He was always helping someone or doing farier work on horses when he was home off the truck. But in 1998 he had his first heart attack. Since then he has had 4 heart attacks and 3 strokes and each time he was told he would not come off of oxygen or walk again without a walker or cane. He would look at the doctors and say watch me. He was so determined to over come any obsticle that came his way, because as he was having his 4th attack he drove 3,000 miles on his truck so he could make it home closer to his mom, (even though he thought it was a cold he had) knowing she could not make a trip to any hospital that wasn't close or at home to see him.I thanked God every day for letting him make it home to see her. He has been a diabetic since he was 17 yrs old. He learn that even though he couldn't work on cars like he use to he started to teach others how to work on their own cars, he took care of the horses and rode them every chance he could. He would help friends and family when needed. He never let it get him down.Then after his last stroke in 2009 , they said he would never walk or talk again, or the use of his right side because he kept having seizures which did more damage than the first 2 strokes. Though he could not talk , he said in a whisper, watch me! And there again he proved them wrong he did learn how to talk again and walk without a cane or walker and came of oxygen. Even though he has become disabled and can't drive or work any more , he stays determined. So he is my hero because of all he has been through , he and I know God has a plan for him. He is a walking testamony of faith and determanation.