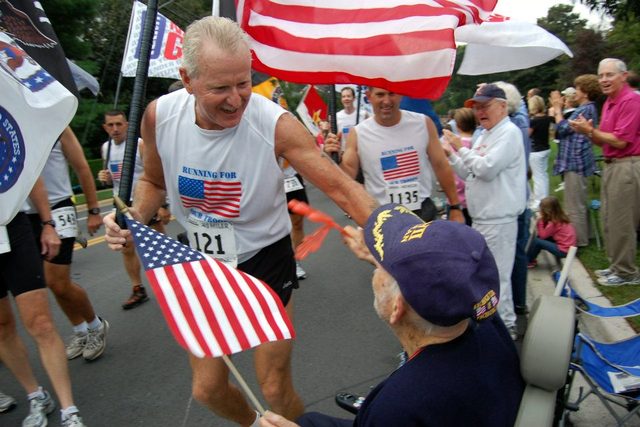 Steve B has risen above any obstacles in his path! After his helicopter was shot down, he ran back to rescue a fellow Marine from the burning rubble. He received two Purple Hearts, 18 Air Medals, and the Navy Commendation Medal for Heroism!

After his military career ended, he Rose Above on marathons and triathlons! He is the American record holder for completing sixteen 281.2 mile Double Iron Triathlons (last year, he completed one at the age of 66!) and was one of the first inductees in the Marine Corps Marathon Hall of Fame. Steve B often runs with the American flag to honor veterans!

He has devoted his life to honoring the sacrifices of our military! Besides leading the local chapter of the Military Order of the Purple Heart and the Marine Corps League, he has led a rally every Friday for 582 weeks at the local military monument to support active duty military members!

Steve B's ability to Rise Above has impacted the lives of many people, influencing many to run marathons, compete in Ironman triathlons, and love their country!!! He is a constant source of positive thinking and encouragement, telling others to "Improvise, Adapt, and Overcome." He is a true hero in every sense of the word!