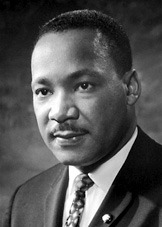 Martin Luther King Jr. is a hero because he was so brave. He stood out in front of lots of people and spoke to them. "I have a dream." He also said, "Don't fight back with fists, fight back with love." His house was bombed and people burned crosses in yards. M.L.K. was so good but one day someone shot him.