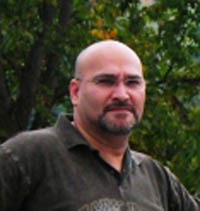 Arturo Ramirez is a hero to so many... for many reasons. He grew up VERY poor with eight bothers and sisters. Shortly after leaving the military as a Vietnam era veteran, he got caught up in drug addiction, alcoholism, and crime (Selling drugs. Lots of them.) Eventually, Arturo spent many years in prison as a very angry man.

And then... something clicked inside.

He spent the rest of his time behind bars getting collage degrees, developing programs to help other inmates turn their lives around, becoming a world-class photo-realism artist, and more. Art made the change and against all odds was released early and has been “a free man" for almost 15 years. He is literally, the “one in a million” who totally turned his life around… forever, never to look back. For over 25 years he has not smoked, done drugs or alcohol, committed any crimes... heck he doesn't even curse! :D

Those accomplishments alone make Arturo a hero to many, as he has helped them follow in his footsteps. Yet the real story is how he gives literally 100% of his heart to people, in service, every day that he lives.

He is 100% service oriented and his greatest joy is in helping elderly people in any way possible: handy man, home renovations, driving, keeping them company, cooking for them, cleaning for them, being their advocate... the list is endless. Money is never, ever an object (even though Arturo lives on nearly nothing himself).

People LOVE him and recognize his sincerity and passion for helping others. He is an example to people of EVERY age, gender, or background on how to reach out and “give to live”. I cannot even tell you how many times people have told me they’ve seen Values.org commercials and thought “oh – that reminds me of Arturo! He does that!” And… he does.

Most recently, after a VERY difficult three year period of a very deep, dark PTSD depression and disabling physical problems, Art has, again, "done the hard work... done the good stuff" and is a shining example of how “come back”. During that time, the only action he could take was to help others… had he not done that, he most certainly would not have made it through his darkest days. He was totally, genuinely hopeless, except that he could still give to others.

And finally… once again… something changed, and he was able to help himself.

In the last year, Arturo has become a picture of absolute vitality and health, loosing 40 pounds, practicing daily meditation and exercise, and living a life of positive thinking. He is now serving others around him, with pure intention and love, showing them how to do the same: get healthy, think positive, and help others (“give to live”!)

If everyone is this world we like Arturo, it would honestly, genuinely be a much better plant. (UNDERSTATEMENT!)

This man cares deeply and takes action to lead the way. He could, quite literally, be the poster child (poster man?) for Values. :D