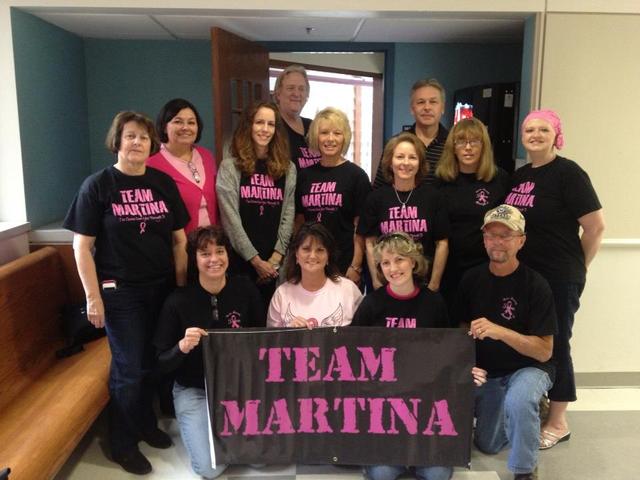 My hero is my cancer fundraising team called Team Martina.
We are the group of fans that Martina McBride showed a photo of on “The Today Show” on Oct 26.
I started this team of country music fans that has raised over $65,000 for cancer research in a year and rallied to save a family in Nashville in danger of losing everything to cancer.

We are inspired by Martina McBride and her music.
The song "I'm Gonna Love You Through It" was a huge hit song last year for Martina
I have been been heavily involved in cancer volunteer work for a number of years. I decided to ask some fellow fans if they would like to do a 5 mile cancer fundraising walk in Nashville as a team. Our team was spread out all over the United States but we wouldn't let that stop us.
One the day of the cancer walk, fans from all over the country flew and drove to Nashville TN to walk together. We raised $22,000.
But story wasn't over yet.
I got the idea to look for some of the cancer survivors from the music video for "I'm Gonna Love You Through It" to invite them to our team.
Via a Facebook search I was able to locate one of them. Her name was Taira and she was in remission from her battle with stage 3 breast cancer. She was a young Mom, only 38 years old, and she had 4 children ranging in ages from 5 to 17. Her and her husband had lost their home once due financial devastation from her first bout with cancer.
Right after I found her, her cancer came back and they only gave her a year to live.
Her family was devastated emotionally and financially.
I and my team of volunteer fans rallied to help her. We organized a benefit concert in Nashville to help Taira and her family so they wouldn't lose their home and so she could buy clothes for her kids. We raised $12,000 for her.
Mystery bags of groceries started showing up on Taira's front porch from Martina fans. Anonymous donations were mailed to her from all around the country and the world.

The story is still happening right now. We have continued our fundraising for Taira and for cancer causes all year.
We have raised a whopping $24,000 in the last 8 weeks for breast cancer research in honor of Taira and in honor of Martina's song. We started a breast cancer grant named for Martina at Vanderbilt Cancer Center in Nashville.