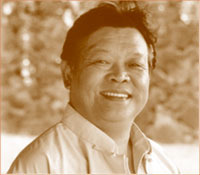 Hong Liu, known to most as "Master Hong" has been a Grandmaster of Qi Gong (the highest attainable level of training) for the last 35 years. While he first began his healing studies in Western medicine in Shanghai, China, Master Hong discovered that there was so much more to healing than what he had learned in school. Therefore he trained with three of China's most well known and powerful Qi Gong masters. Prior to his arrival in the United States, his clients included high-ranking Chinese officials, the Chinese Olympic Swimming and Diving teams and Asia's biggest celebrities.
In 1991, Master Hong relocated to the United States upon the recognition of his life destiny: to introduce the valuable secrets of Qi Gong to the West. In 1997, his vehicle for spreading the benefits of Qi Gong was published: The Healing Art of Qi Gong as Taught by a Master (Warner Books). He has been named Distinguished Professor of Qi Gong at the Emperor's College of Traditional Oriental Medicine in Santa Monica, California and Samra University of Oriental Medicine in Los Angeles, California. It is encouraging to Master Hong that the NIH (National Institutes of Health), based in Maryland, have established an Office of Alternative Medicine to study non-Western techniques and the World Health Organization is now supporting the use of Chinese medicine as well. Master Hong himself has been working in conjunction with the NIH National Cancer Institute in researching Chinese herbs that may have significant therapeutic benefit in adjunct cancer treatment.

Master Hong currently teaches Qi Gong and natural healing seminars throughout the U.S. as well as abroad. He is the teacher/healer for many internationally-renowned celebrities as well as thousands of others who seek well-rounded, healthy living philosophies.