“An honest heart possesses a kingdom.”

“Do not follow where the path may lead. Go instead where there is no path and leave a trail.”

“Every fool knows you can't touch the stars, but it doesn't stop a wise man from trying.”

“Have patience with all things, but chiefly have patience with yourself. Do not lose courage in considering your own imperfections, but instantly set about remedying them—every day begin the task anew.”

“The grand principles of virtue and honor, however they may be distorted by arbitrary codes, are the same the world over: and where these principles are concerned, the right or wrong of any action appears the same to the uncultivated as to the enlightened mind.”

“You can cheat an honest man but not make a fool out of him.”

“The world is round, and the place which may seem like the end may also be the beginning.”

“Every thought is a seed. If you plant crab apples, don't count on harvesting Golden Delicious.”

“This is a exciting world. It is cram-packed with opportunity. Great moments wait around every corner.”

“Self-esteem is as important to our well-being as legs are to a table. It is essential for physical and mental health and for happiness.”

“Let us speak, though we show all our faults and weaknesses — for it is a sign of strength to be weak, to know it, and out with it.”

“The greatest way to live with honor in this world is to be what we pretend to be.” 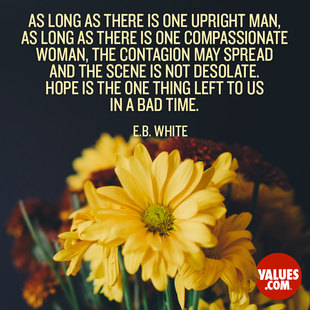 “A trying journey can only result in a phenomenal blessing.”

“Love is the triumph of imagination over intelligence.”

“Life at its noblest leaves mere happiness far behind; and indeed cannnot endure it.... Happiness is not the object of life: life has no object: it is an end in itself; and courage consists in the readiness to sacrifice happiness for an intenser quality of life.”

“What you don't see with your eyes, don't witness with your mouth.”

“Good communication is just as stimulating as black coffee, and just as hard to sleep after.”

“For a long time it had seemed to me that life was about to begin - real life. But there was always some obstacle in the way, something to be gotten through first, some unfinished business, time still to be served, a debt to be paid. Then life would begin. At last it dawned on me that these obstacles were my life. ”

“If one is lucky, a solitary fantasy can totally transform one million realities.”

“I can't change the direction of the wind, but I can adjust my sails to always reach my destination.”

“Lying can never save us from another lie.”

“I have the greatest weapon, I have hope.”

“The least initial deviation from the truth is multiplied later a thousandfold.”

“I discovered I always have choices and sometimes it's only a choice of attitude.”

“Friendship, love, health, energy, enthusiasm, and joy are the things that make life worth living and exploring.”

“With every experience, you alone are painting your own canvas, thought by thought, choice by choice. ”