No two softball players exemplify sportsmanship more than Mallory Holtman and Liz Wallace. These college athletes showed us that kindness and compassion are the real paths to victory when they carried their injured opponent around the bases after she hit a home run.

See the billboard that inspired this podcast. 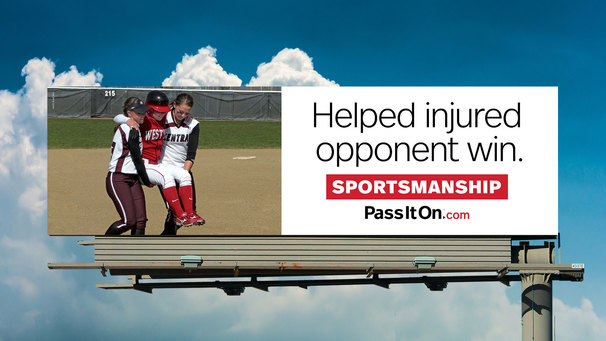 Email
Your Comments
Anonymous APRIL 27, 2015
I think this Values.com Podcast was touching

Olivia from washingtion FEBRUARY 8, 2013
That is amazing what they did.

Madelyn from M,N JANUARY 8, 2013
That is very touching yet sad but still very happy!

Rita from San Dimas, CA JULY 24, 2012
Such an inspiring story about kindness and compassion!!!

Elyssa from southern pines  APRIL 19, 2012
I feel very happy that she got her first homerun! But i felt bad when she got hurt :(

Be sure to listen to our other Pass It On® podcasts.

All Pass It On® Podcasts